Authorities reported the incident to Wildlife SOS, following which the snake was safely rescued and relocated to a safe habitat. 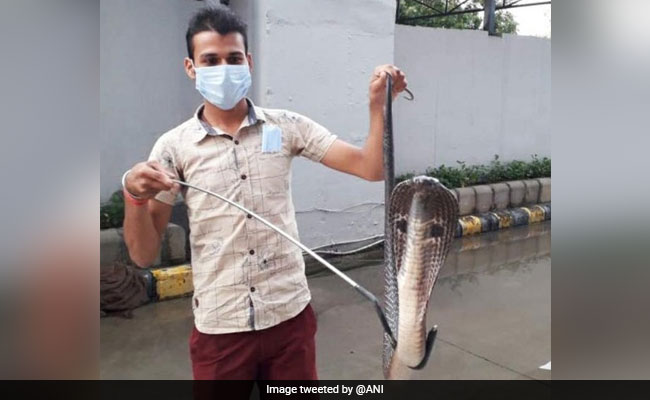 The snake was safely rescued by Wildlife SOS and relocated to a safe habitat.

A four-feet-long cobra was spotted by Delhi Metro Rail Corporation (DMRC) workers near a gate of Saket Metro Depot on Friday.

Authorities reported the incident to Wildlife SOS, following which the snake was safely rescued and relocated to a safe habitat.

According to a press statement, "a four-foot-long Cobra snake was spotted by the DMRC workers near the front gate of the Saket Metro Depot. The authorities took timely action and immediately reported the incident to Wildlife SOS on their 24-hour rescue helpline (+91-9871963535)".

The snake was safely rescued by Wildlife SOS and relocated to a safe habitat. A two-member team from the NGO was deployed to carry out the rescue operation. When dealing with venomous snakes such as the cobra, it is extremely important to keep them calm and maintain public safety to avoid unnecessary accidents, the press statement read.

According to the press statement, Cobras inhabit a wide range of habitats in India and they can even be found in heavily populated urban areas.

Kartick Satyanarayan, co-founder and CEO of Wildlife SOS, said, "Despite their reputation of being one of the deadliest snakes in India, cobras seldom bite but will give out a warning sign by displaying their hood. However, It is necessary to let trained snake rescuers handle such situations. We are grateful to the DMRC authorities for their cooperation."

Wasim Akram, Deputy Director-Special Projects at Wildlife SOS, said, "Wildlife SOS reaches out to injured or distressed wildlife on a 24-hour basis. We request people to keep supporting our cause and immediately report any such situations on our helpline number."

Recently, the NGO rescued a python from Saket Metro Station and a Cobra from the Okhla bird Sanctuary Metro Station, the press statement added.