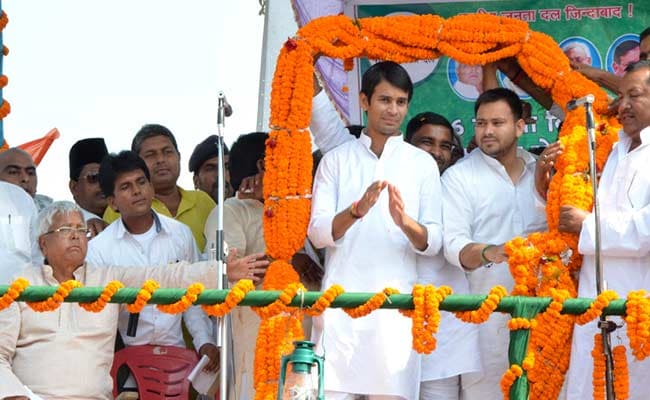 RJD chief Lalu Prasad with sons Tejaswi Yadav and Tej Pratap at a rally after the latter filed nomination papers from Mahua assembly constituency, in Hajipur on Monday. (PTI Photo)

Tej Pratap, who is older, wrote his age as 25 in his nomination papers for the state assembly polls, because that is his age according to the voters' list.

"It is a minor technical error," said Election Commission sources. The state's Chief Electoral Officer Ajay Naik said corrections cannot be made "in the middle of the election process."

The mistake means that Tej Pratap is his younger brother's junior, at least in this election.

Those who have observed the two say this role reversal is a sign, one that reflects on the brothers' dynamics. Along with their sister Misha Bharti, they are the only ones among Lalu Prasad's nine children to enter politics.

30 minutes after filing his nomination for the Mahua assembly seat yesterday, Tej Pratap addressed a public meeting and his inexperience showed.

Unlike his younger brother Tejaswi - who is also a first time candidate but has campaigned with his father in last year's national election - Tej Pratap is new to rallies, so the crowds wanted to hear him. They appeared less than impressed when he wrapped up in just under five minutes.

"The roads here are such that in the rain, an elephant would drown...I will make them better," said Tej Pratap. Immediately, his father whispered something to him.

Tej Pratap then repeated his comments in the local Bhojpuri dialect, and managed to draw some applause.

Next to speak was Tejaswi, who is widely seen as Lalu Prasad's political heir. In a near-flawless performance, he spoke for over 30 minutes without being prompted by his father, who was seen nodding appreciatively more than once.

Tej Pratap can't avoid comparisons with his brother; to questions about a brewing rivalry, he gamely replies: "Tejaswi and I are like Krishna-Balram in the Mahabharata, we are united and we are going to win."

But both brothers are in the same corner when it comes to the battle of perception, comments Tej Pratap. "Many people say we are young, my rival says he defeated my mother Rabri Devi, but we are very mature, don't go by looks," Tejaswi says at the rally.