Delhi Election: Polling for the 70 seats of Delhi Assembly began at 8 am in the national capital amid tight security today. The voting will continue till 6 pm in the evening. 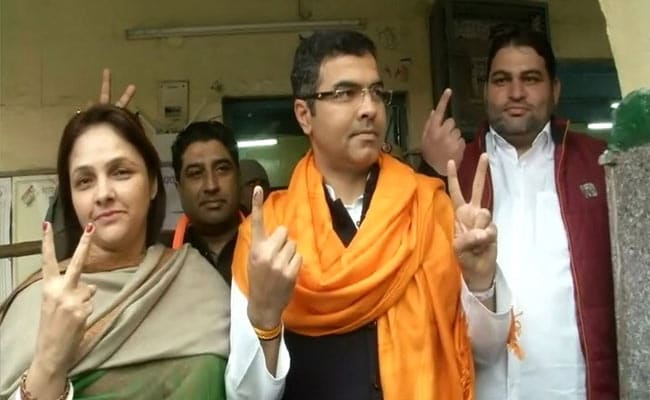 Mr Verma, who arrived at the polling booth with his family, said: "I hope we will get a chance to work for the people of Delhi. There has been no development in Delhi for past several years. I appeal to the people of Delhi to vote on the basis of development. We will attain more than 45 seats."

BJP and Congress have fielded Rajesh Gehlot and Sumesh Shokeen from the Matiala assembly constituency, respectively. Gulab Singh Yadav of AAP is the current MLA and party's candidate from the seat.

BJP leader Kapil Mishra, who is contesting from Model Town Assembly Constituency, also cast his vote in Yamuna Vihar area. He was accompanied by his wife and mother.

Polling for the 70 seats of Delhi Assembly began at 8 am in the national capital amid tight security today. The voting will continue till 6 pm in the evening.

The city is witnessing a triangular contest among the ruling AAP, which won a landslide majority in the last elections, the BJP and the Congress. In the last poll, the AAP had won 67 seats, the BJP 3. Congress didn't open its account.

Chief Minister Arvind Kejriwal-led Aam Aadmi Party (AAP) is hoping to retain power for the second consecutive term. Similarly, the BJP is hopeful to gain a majority by cashing in on the popularity of Prime Minister Narendra Modi.

The Congress, which was in power for 15 years at a stretch in Delhi under the leadership of former Chief Minister late Sheila Dixit till the party lost to AAP in 2015 polls, will be hoping for a revival.