For the first time in 143 years, this world renowned event was held without the accompaniment of troupes, tableaux and public participation due to the coronavirus outbreak. Traditionally, the procession, led by chariots, would start early morning from the 400-year-old temple and return by evening. 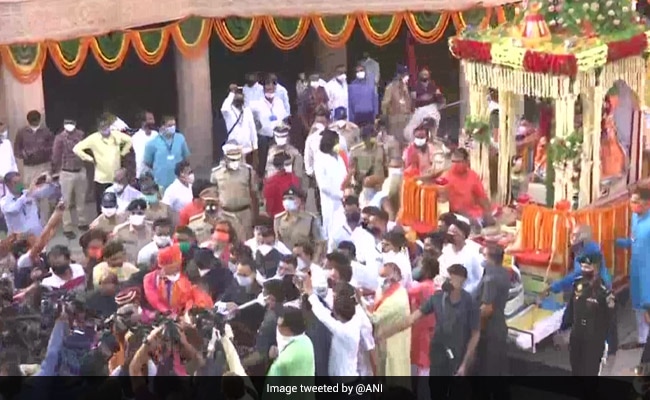 After the ritual, three chariots began a symbolic rath yatra without the usual festivities in Ahmedabad

A symbolic Rath Yatra was organised in the Lord Jagannath temple premises in Ahmedabad today after the Gujarat High Court rejected the state government's plea to carry out a full-scale public procession.

For the first time in 143 years, this world renowned event was held without the accompaniment of troupes, tableaux and public participation due to the coronavirus outbreak.

Early in the morning, Chief Minister Vijay Rupani performed 'Pahind Vidhi', a ritual of cleaning the road with a golden broom, for the chariots of Lord Jagannath, his sister Subhadra and brother Balram to embark on their journey.

After the ritual, three chariots began a symbolic rath yatra without the usual festivities inside the premises of the Lord Jagannath temple in Jamalpur area of Ahmedabad.

In a late night judgment, the high court refused to change its earlier order which stayed the rath yatra, and asked the temple to go for a symbolic procession inside its premises, instead of taking out a grand procession in the city.

This is the 143rd Rath Yatra of Lord Jagannath, and for the first time it is devoid of the usual procession, temple trustee Mahendra Jha said, adding that very few people were allowed inside the temple premises in a bid to contain the spread of coronavirus.

After performing 'Pahind Vidhi', the Chief Minister said his government was ready to even impose curfew on the route so that the procession could be taken out without risking the health of people.

"We had requested the high court to grant us permission on the lines of the Supreme Court's nod to carry out Rath Yatra in Puri. The hearing went on till late Monday night but the high court did not give us permission. Now, the chariots will move inside the temple premises," Mr Rupani told reporters before leaving.

As per the tradition, people from the Khalasi community pulled the chariots inside the temple premises.

Traditionally, the procession, led by chariots, would start early morning from the 400-year-old temple and return by late evening. It used to take a one-hour break at Saraspur for lunch.

Lakhs of people used to gather along the route on 'Ashadhi Beej' every year to catch a glimpse of the decorated elephants and tableaux moving around in some 100 trucks.

The procession used to come back to the Lord Jagannath Temple after covering a distance of 18 km in 12 hours. But this time, the chariots will remain inside the temple premises.