Minister Srinivas Goud said that he fired a "rubber bullet" and all the speculations about him firing a real bullet is fake. 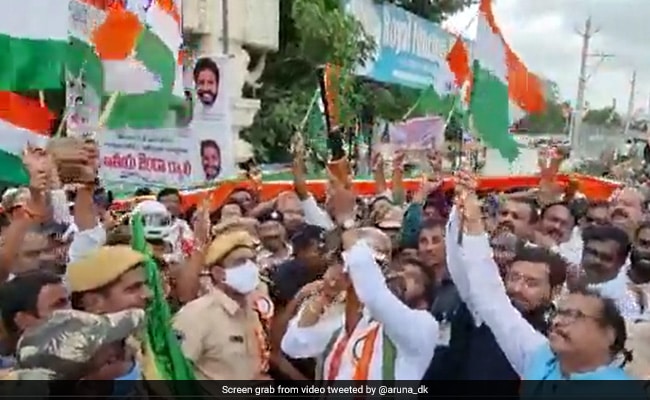 The viral video shows the Telangana minister firing in air during the rally.

Telangana Minister of Prohibition and Excise, Srinivas Goud, landed into a controversy after he allegedly opened fire from a loaded police gun at a public rally on Saturday.

The video of the incident is shared across social media and it is going viral. Srinivas Goud participated in the Swatantra Bharat Vajrotsavam celebrations and the rally started from Zilla Parishad to Tank Bund.

The viral video shows that there was a panic situation as Srinivas Goud allegedly opened fire from a self-loaded rifle of a cop. He fired a bullet into the air. Netizens and the common people questioned him about how the Minister can open fire by taking the law and order under his control.

Condemn this irresponsible act of 'firing' by Minister Srinivas Goud & seek his dismissal from cabinet. His arrogance in firing & then defending it, both show an utter disregard for law & order.

The police personnel on duty too need to be reprimanded for this callousness. pic.twitter.com/YtIJef5u2D

In view of these developments, Mr Goud broke his silence on the controversy, He said that he fired a "rubber bullet" and all the speculations about him firing a real bullet is fake.

Mr Goud further said to the reporters that he is a Sports Minister and a member of the All India Rifle Association which makes him eligible to use the weapon. The Minister further said that he is ready to submit his resignation if allegations against him are proved to be true.