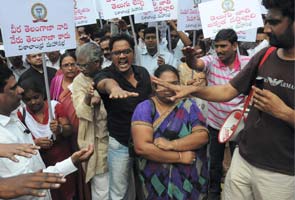 Hyderabad: Government administration in 13 districts across coastal Andhra and Rayalaseema regions of Andhra Pradesh came to a grinding halt on Tuesday as employees of all departments launched an indefinite strike demanding revocation of the Centre's decision to divide the state.

Normal life was largely affected because of the strike as well as continued agitation by people in Seemandhra regions over the last 13 days.

More than 11,000 buses remained confined to depots, affecting transportation not only across the region but also in the state capital.

Even bus services to Tirumala Hills, the abode of Lord Venkateswara, had come to a grinding halt since midnight due to the strike.

The RTC operates 1,000 buses to Tirumala Hills every day from Tirupati at the foot of the hill and various other locations.

This was the first time in more than three decades that not a single bus plied to Tirumala Hills, sources said.

However, in a late night decision, it was announced that the bus services to Tirumala Hills will be restored from Wednesday,

Promoted
Listen to the latest songs, only on JioSaavn.com
The decision was taken after RTC employees agreed to exempt these services from the ongoing indefinite strike in support of united Andhra Pradesh, sources from Tirupati said.