'Kaththi', Tamil Film Starring Vijay, May Not Release on Diwali 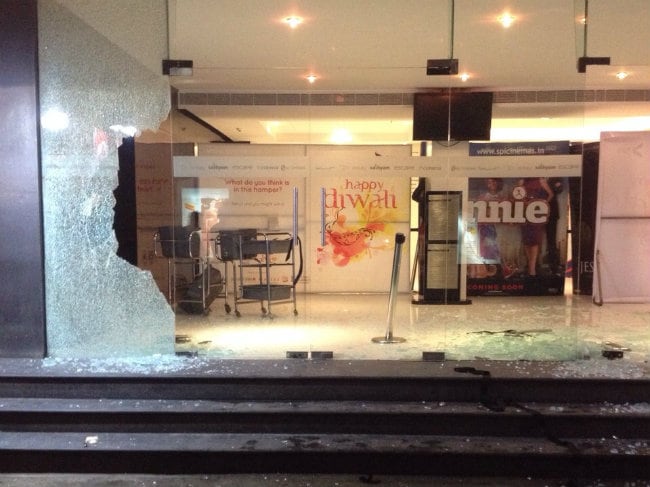 The exterior of Satyam Cinemas in Chennai which was vandalised

Chennai: Popular Tamil star Vijay's new film, Kaththi, ("knife") was billed as a huge Diwali release. But there's uncertainty about whether it will keep its date with Tamil Nadu.

Late on Monday night, a popular cinema in Chennai was targeted by a group that broke glass windows and threw crude kerosene bombs at the lobby and the ticket-booking booth. The Satyam Multiplex was crowded with people watching night shows, but fortunately, nobody was injured.

Tickets for the film are meant to go on sale in cinemas today. But a senior member of the Tamil Nadu Theatre Owners' Association said, "There is no way we would screen this film...we can't take any risk. We would take a call after a meeting this afternoon."

Police and cinema officials are not commenting on whether last night's attack was captured by security cameras. Nobody has been arrested so far.

In recent days, the film's producers had been accused of links to Sri Lankan President Mahinda Rajapakse, deeply unpopular in Tamil Nadu where he is held responsible for the deaths of thousands of Sri Lankan Tamils by defence forces in the final months of his country's civil war.

After protests, the film's producers, as part of a compromise agreement, agreed to remove their logo from all publicity material for Kaththi. In a statement issued last night, Lyca Productions, which had earlier denied any business links with the Sri Lankan President, said "We are happy to announce that all the issues have been solved amicably."

In February last year, actor Kamal Haasan's film Viswaroopam was temporarily banned by the state government after protests by Muslim groups. It was released after parts were re-edited.

Promoted
Listen to the latest songs, only on JioSaavn.com
Last year, Vijay's film Thalaivaa released weeks after it was meant to in Tamil Nadu after bomb threats to cinemas. The film, about an underworld gang-member in Mumbai, was accused by fringe groups as negatively portraying Tamil leaders and philanthropists in Mumbai.