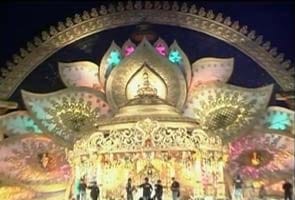 Vizianagaram: Andhra Pradesh's Transport Minister and state Congress chief, Botsa Satyanarayana Rao has claimed that he has paid for the 'taxis' and didn't force them to transport guests at his daughter's wedding last week in Vizianagaram district. The explanation comes after angry protests that he had used his position to get more than 300 SUVs from three districts to ferry the guests, who included governors and central and state ministers.

Faced with the question of who paid for the vehicles, the minister today quickly said that he did and denied the misuse of his position, before rushing away in his official car in Hyderabad.

Two other ministers, who used the vehicles at the wedding, brazenly invoked security concerns as a justification. "Who says we can't travel as ministers. Our security is the responsibility of the state," Civil Supplies Minister Sridhar Babu and Revenue Minister Raghuveera Reddy told the media and called it an "unnecessary controversy".

The curious coincidence that many state ministers and other VIPs chose the day of the wedding to hold review meetings in that one district is also being questioned. Many were travelling with their families.

District officials have admitted on camera to NDTV that hundreds of vehicles were requisitioned for attending to VIP protocol. "The district collector and commissioner had requisitioned over 100 vehicles for VIP duty," the local transport commissioner said.

Private taxi operators are reluctant to go on record with who called for the vehicles and who is paying, but say that they were forced to comply. Several operators say they had to cancel pre-existing booking to accommodate the demands.

Oppsition Lok Satta party leader Jayaprakash Narayan strongly criticised the alleged misuse of official machinery. "The way public office is abused, public money is squandered, should the governor, Union ministers, a chief minister go there at public cost, should the machinery of the government be utilised for private purpose, as if it's a monarch's wedding. The queen of Britain would also not dare to have a celebration of that kind at the cost of the public exchequer," he said.

Former energy secretary and senior IAS officer EAS Sarma in a letter sent to Sonia Gandhi and the Andhra Chief Minister among others has called it "nothing but a farce" that so many ministers and others chose to conduct meetings in the district precisely on the same date in an attempt to give a private visit the garb of an official one. He has demanded to know who paid for the transport arrangements and hosting of so many VVIPs.

It was as though not just the entire district machinery of Vizianagaram, but also from the adjoining Visakhapatnam and Srikakulam had been drafted for wedding duty. Policemen were deployed in huge numbers.

Officials say the visit of so many VIPs calls for not just protocol and deployment of official machinery but also raises security issues. The venue of the wedding is on the Andhra-Orissa border where there is Maoist threat as well.

Congress leader PC Chacko said in Delhi yesterday that if official machinery was misused, the Congress was not for it.

Andhra Pradesh Congress Committee chief Botsa Satyanarayana is considered a very influential leader in these parts with influence over several sectors. He and his family are being investigated for links in the liquor mafia scam.
Comments
Andhra Pradesh wedding