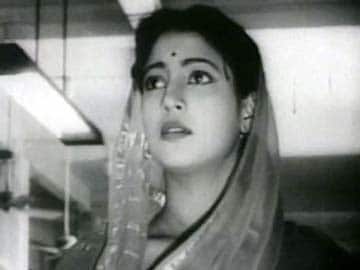 Kolkata: Six decades ago, long before Aishwarya Rai and Kareena Kapoor set out to prove that married actresses could be celluloid heroines, a 21-year-old actress was single-handedly leading the charge in Bengal.

By the time she had her first big hit in 1953's Sharey Chuattor opposite Uttam Kumar, the man who was to be one-half of Bengali cinema's most revered screen couple with her, Suchitra Sen had already been married six years and was the mother of five-year-old Moon Moon. Over the next 20 years, Uttam-Suchitra became part of cinematic legend and Suchitra Sen one of Bengal's brightest stars.

Rama Dasgupta was born in Pabna, now in Bangladesh, on April 16, 1931 to a schoolteacher father and homemaker mother. She was 16 when she married Dibanath Sen, scion of a wealthy business family in Calcutta, in 1947. The couple had a daughter named Moon Moon in 1948 and remained married, amid rumours of trouble, all through Suchitra Sen's meteoric rise to stardom till Dibanath Sen's death in the '70s.

In 1952, Rama Sen, now called Suchitra, faced the arclights for the first time in the ill-fated Shesh Kothay which was never released. Just the next year, however, Sharey Chuattor made her a star and launched the canon of Uttam-Suchitra romances. In 1955, the young Suchitra Sen starred as Paro in her first Hindi film, Bimal Roy's adaptation of Bengali classic Devdas, opposite Dilip Kumar and Vyjayanthimala. She appeared, with varying degrees of success in other Hindi films including Musafir (1957), Mamta (1966) and Aandhi (1975) in which she played a politician, reportedly a fictionalized version of Indira Gandhi. She was nominated for the Filmfare Best Actress award for both Mamta and Aandhi.

Back home in Bengal, Suchitra Sen was incomparable. With Uttam Kumar, she made movie magic in films like Sagarika (1956), Harano Sur (1957) and Saptapadi (1961). She was also feted for her dramatic performances in films like Dweep Jele Jai (1959) where she played a psychiatric nurse who develops a relationship with a male patient as part of his therapy, and Uttar Falguni (1963) as the courtesan Pannabai and her lawyer daughter Suparna.

In 1963, Suchitra Sen became the first Indian actress to win an international award, receiving the Silver Prize for Best Actress at the Moscow Film Festival for Saptapadi.

As the '70s wound to a close, so did Suchitra Sen's career. She refused a film offer from Raj Kapoor and was unable to find dates for a film directed by Satyajit Ray. In 1978, she made her last celluloid outing in Pranoy Pasha opposite Soumitro Chatterjee, retiring not just from the big screen but from public life itself. So reclusive did the actress become that she was dubbed India's Greta Garbo, even refusing the Dadasaheb Phalke Award in 2005 because it meant travelling to New Delhi. Over the years, just a handful of people were admitted into her South Kolkata home apart from daughter Moon Moon and grand-daughters Raima and Riya Sen.

Promoted
Listen to the latest songs, only on JioSaavn.com
In 2012, Suchitra Sen received the 'Banga Bibhushan' award from the government of West Bengal.