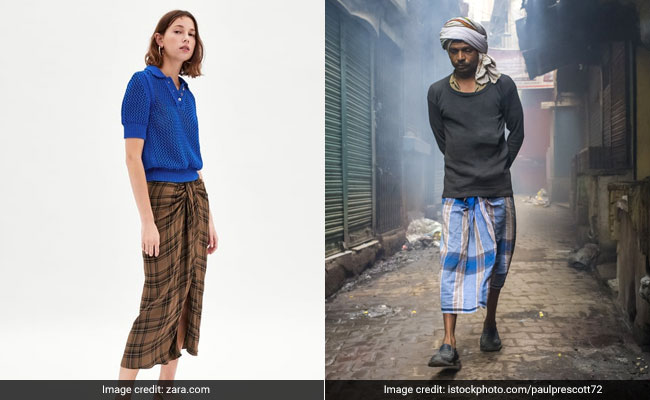 This skirt from Zara has created a flurry on Twitter.

This isn't the first time we have seen desi products being given a videsi twist. We've lived to see khatiyas being sold as 'Indian daybed charpoys' and chai being transformed to 'chai tea latte', but does this one take the cake? Fast fashion retailer Zara has come up with a skirt that bears a striking resemblance to the traditional Indian lungi.

A £69.99 skirt from @ZARA that looks like a south Asian male skirt (lungi) that costs less than 1 pic.twitter.com/47aA2SSSg5

The lungi is a traditional garment worn around the waist by men in India, Bangladesh, Pakistan and other countries of South East Asia. Zara's version, meanwhile, is described on their website as a 'flowing skirt with draped detail in the front' featuring 'front slit detail at the hem' and 'zip fastening in the back hidden along the seam'.

For some context and comparison, a traditional lungi can be found easily on Indian ecommerce websites for as low as Rs 300.

People on Twitter haven't stopped commenting on this 'skirt' since its resemblance to a lungi was first noticed:

Who wore it better? And yes Zara, that's a lungi! pic.twitter.com/65KwCBxIDC

Zara is selling lungi now... not buying clothes in '18 was a good idea... such temp relief from shit that gets sold these days pic.twitter.com/8pv0OuyLMh

While Zara's checked skirt is only available in brown, traditional lungis can be found in an array of designs and colours. It is popular in hotter climates where trousers are often uncomfortable.

Here are seven other instances of when the West repackaged and sold desi products.