Rabbit Or Raven? Viral Video Will Make You Question Your Eyes

Over 3 million views for this video - and counting 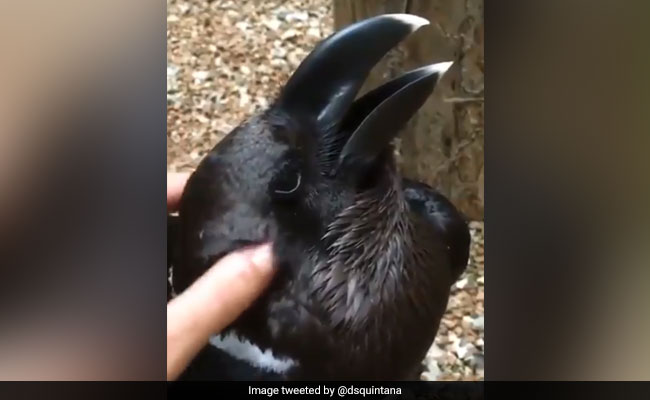 A viral video has triggered a debate on whether the animal it features is a rabbit or a bird.

Forget the dress colour debate. Forget the 'beach or stormy sky' optical illusion. What the Internet really wants to know these days is whether the animal being petted in a viral video is a rabbit or a raven.

On Sunday, Daniel Quintana, a senior researcher in biological psychiatry at the University of Oslo in Norway, shared a video that has gone massively viral on Twitter. The video features a black rabbit... or a raven - the Internet can't decide which. It has been viewed over 3.3 million times and triggered a fierce debate on whether the animal is a bunny or a bird.

Rabbits love getting stroked on their nose pic.twitter.com/aYOZGAY6kP

Twitter users are now locked in a debate about what the animal is. Take a look at some of the reactions:

I see a raven. Anyone else?

I don't know... The beak seems too curved for a crow. But if it is, I would definitely love to have a pet crow like that!

To some, the video was also reminiscent of the famous bunny/duck optical illusion

The optical illusion came to life, it's official, someone has a magic pen!!! pic.twitter.com/EDX84LTzT8

According to CNet, Mr Quintana himself wasn't fooled by the illusion. To him, it was clear that the video featured a bird.

"I thought it was fairly clear that the video was of a bird... as you can see the translucent nictitating membrane sweep across the eye horizontally (rabbits don't have membranes like this) and the positioning of the 'ears' are a little strange," he said.

"I made the rabbit comment to prime readers into thinking it was actually a rabbit, to give it a fighting chance at least," he said. "When you only see the beak in your peripheral vision, it really seems like they're ears. Without this misleading cue, I thought most people would have seen a bird."