"How? I mean the laws of physics can't explain this," wrote one viewer. 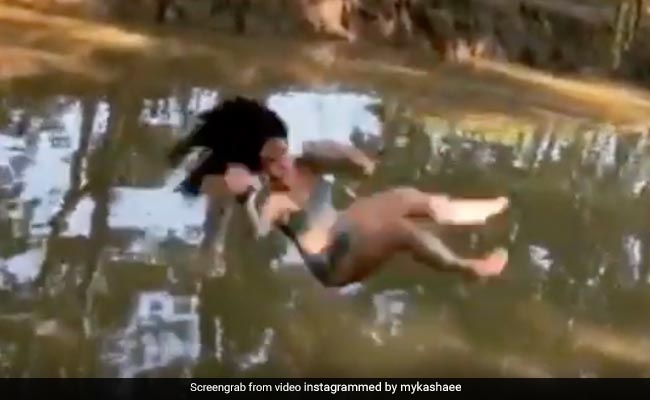 A woman appeared to float in the air for a split second while falling off a rope swing.

Viewers are freaking out over an Instagram video that appears to show a woman floating in mid-air while falling off a rope swing. The video was posted on Instagram by user Myka Shae last Monday and begins by showing two women on a wooden platform above a creek. One of them hops onto a rope swing hanging above the platform and leaps out over the water.

Unluckily, she loses her grip on the rope swing and begins falling down - until something strange happens. Right in the middle of the fall, the woman appears to stay still mid-air for a split second. Then, she flips and changes directions before crashing down into water.

"2020 hit me hard," wrote Myka Shae while sharing the bizarre clip on Instagram. Take a look at it below:

The video was filmed in Texas, according to Unilad. Since being posted on the photo and video sharing platform, it has collected over 2.5 lakh views and more than 700 comments - many from people trying to figure out how the woman appeared to defy the law of gravity.

"I'm so confused. What just happened?" asked one Instagram user in the comments section.

"How? I mean the laws of physics can't explain this," another said.

"Are you a Jedi?" one viewer wondered.

Some Instagram users did manage to crack the mystery. They pointed out that there was a finer rope attached to the deck which she got tangled in, breaking her fall briefly. "Look closer. There's a string hanging off the bar she's swinging on and she gets tangled in it as she falls. Case solved," an Instagram user explained.