Nobody Can Answer Diljit Dosanjh's Brainteaser. Can You Solve It?

"I was the weakest student in math class," quipped Diljit while sharing the puzzle. 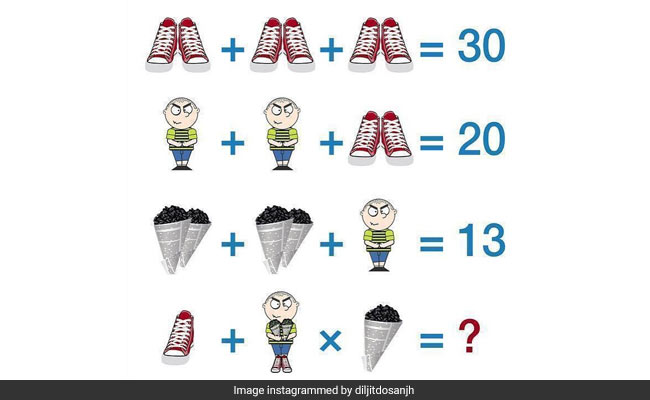 Can you solve this brainteaser?

This is a brainteaser that seems to have sent social media into a meltdown. This evening, Diljit Dosanjh took to Instagram to share a math puzzle with visual clues that has left his followers baffled. The puzzle contains three things that each seem to represent a number. These include a cartoon sketch of a boy, a pair of red shoes and a newspaper cone.

While adding three pair of shoes will get you the answer 30, adding two boys with a pair of shoes will result in the number 20. The actor asked his followers to come up with an answer to the final equation in the series - and the responses varied wildly.

"Sitting idle, might as well take a math class," wrote Diljit in Punjabi while sharing the brainteaser. "Although I was the weakest student in math class," he quipped, asking his 8.4 million followers to answer the puzzle.

Take a look and see if you can solve it:

Since being posted online just a couple of hours ago, the math question has collected over 63,000 replies and more than 52,000 'likes'. However, nobody seems to have guessed the correct answer so far.

While many said that the answer is 60, Diljit promptly shot them all down.

"28 is the wrong answer," he added in response to another comment..

Other answers to the equation he refused to accept include the numbers 16, 48 and 19, among others.

What do you think the correct answer is?