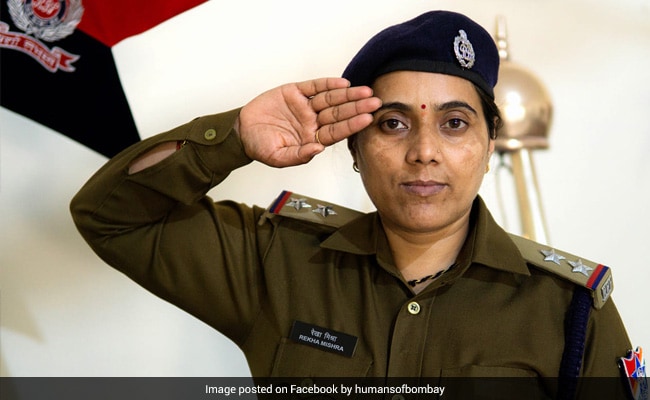 Policewoman Rekha Mishra was awarded the Nari Shakti Puruskar in 2017.

Rekha Mishra hopes that the work she does helps young girls realise that "they can be the heroine of their lives and that they have the power within them to write their own stories". She, after all, is living testimony to the power of women. A policewoman with the Railway Protection Force (RPF) in Mumbai, Rekha Mishra's daring exploits and determination has helped save more than 950 runaway and trafficked children.

The policewoman recently sat down with Humans of Bombay for an interview in which she spoke about her childhood, her work with the RPF and much more.

Ms Mishra says that she was inspired to join the police force by her father, who served in the army. "My sisters and I were encouraged to take up a life of service," she says.

As a young girl, Rekha Mishra would wake up early to study and work out. "The day I passed, my father saluted me-'Always work for a cause, not the applause,' he said.

Ms Mishra was posted at Mumbai's famed Chhatrapati Shivaji Maharaj Terminus and was in-charge of preventing trafficking of women and children. She is credited with rescuing hundreds of destitute, missing, kidnapped or runaway children from various railway stations in the last few years.

Her exemplary work helped her win the Nari Shakti Puraskar in 2017 for outstanding contribution to women empowerment.

Citing an example of one incident where her work made a big difference, Ms Mishra reveals that she once helped nab a 45-year-old man who had kidnapped a 15-year-old. "As I saw the girl boarding the train, I grabbed her hand and pulled her aside while my team surrounded the kidnapper and arrested him. She cried and yelled, 'Thank you, thank you for saving me!'" says the policewoman. "The kidnapper had molested her and wanted to marry her."

In another instance, Ms Mishra helped a 16-year-old who ran away from home and came to Mumbai. "She looked lost when I tracked her. Her parents were unaware that she'd left home and only when they arrived did we learn that she was pregnant," she says.

Despite her stellar record and the numerous honours she has received - in 2018, her feats of child rescue were even included as a chapter in the SSC textbooks in Maharashtra - Ms Mishra has had to face criticism too. One time, she says, someone asked her who cooked at home while she worked. Phrases like "Women officers aren't suitable for ground work" are something she has heard often.

But alongside the doubts and digs she has faced, Ms Mishra has also received praise and goodwill from the children she has rescued, their families and even complete strangers.

At 35, she is often asked when she is going to have children of her own, but Ms Mishra says, "Children aren't the only things that make a woman, a woman-sometimes it's her ambition, her relentlessness.

"So I just hope that through what I do, girls everywhere realise that they can be the heroine of their lives and that they have the power within them to write their own stories."

"We are tremendously fortunate to have people like you in our country. I'm gonna read this article to my child when he grows up," wrote one person in the comments section.

"Thank you madam for your service. We are indebted for your forever. Salutes to your father," said another.

Twitter Reactions To Meghan And Harry's Tell-All Interview With Oprah