Railway Cop Saved Hundreds Of Kids. Now She Is A "Lesson" In Maharashtra 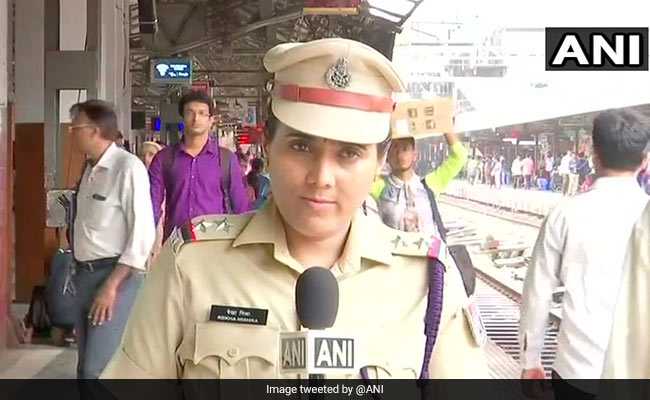 Mumbai: A policewoman with the Railway Protection Force (RPF) in Mumbai has achieved a unique distinction - her feats of child rescue have been saluted as a study chapter in the SSC textbooks in Maharashtra.

The woman is RPF Sub-Inspector Rekha Mishra, 32, posted with the Central Railway. She is credited with rescuing hundreds of destitute, missing, kidnapped or runaway children from various railway stations on the network in the past few years.

Her daring exploits to save these children, often battling great odds, figure in the Maharashtra State Board's Class 10 textbook in Marathi this academic year.

Hailing from an army officer's family from Allabahad in Uttar Pradesh, Rekha Mishra joined the RPF in 2014 and is currently posted at the famed Chhatrapati Shivaji Maharaj Terminus (CSMT).

She was felicitated at a special function organised by Central Railway General Manager DK Sharma in Mumbai on Monday for her achievements which have been noticed widely.

"She is doing an excellent job and simultaneously serving a noble social cause too. Her being part of the chapter in the textbook will definitely inspire the new generations," Mr Sharma said.

Ms Mishra said: "It's a moment of great pride for me... Most children run away from homes after fights with their parents or siblings... Some do it to meet their Facebook friends or even to meet their favourite films stars, and others are lured by the glamour of Mumbai. A few unfortunate ones have also been kidnapped." She told news agency ANI that she has helped 953 children till now.

She said that her team keeps an eye open to ensure that such children - mostly in the impressionable age group of 13-16 - don't end up in the wrong hands and suffer, and the final aim is to reunite them with their families.

Mr Udasi told ANI, "Rekha Mishra is a dedicated and a helpful officer. It's a proud moment not only for us but for the entire country. She used to watch out for those children who were vulnerable or lost and used to assist them. I even thank the Maharashtra government for recognising her efforts. I hope when people read on her (Mishra), they will be inspired to take such similar steps."

In the past four years, she and her alert team have rescued more than 430 such innocent children including 45 minor girls, a deaf-and-dumb boy and many others who couldn't speak Hindi and interpreters had to be called.

Promoted
Listen to the latest songs, only on JioSaavn.com
A majority of the children were found to be from Uttar Pradesh and Bihar, and some others from all over India, with the numbers usually shooting up during the summer vacations, she said.

While the RPF managed to trace the families of around two dozen such children, the rest are lodged in children's care homes in the city till their kin are located.