It's so small, the joke is that it can only hold a single Tic Tac 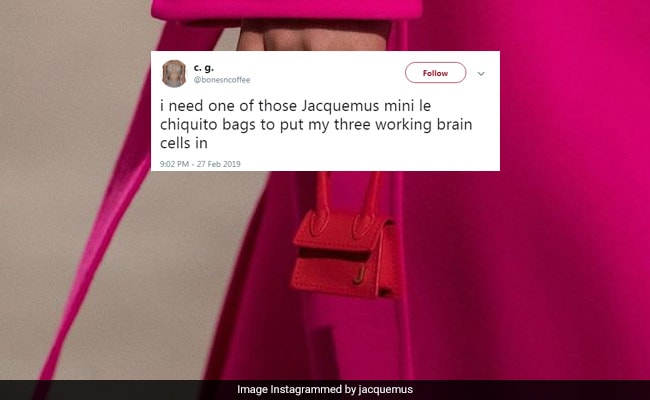 The teeny tiny Le Mini Chiquito has led to a ton of reactions on social media.

It's so small wags joke that it can only hold a single Tic Tac, but French brand Jacquemus' teeny weeny bag,  "Le Mini Chiquito", is arguably the biggest thing at Paris fashion week.

Never has something so tiny excited so much fashion passion -- and hilarity -- on social media.

The handbag -- or should we say fingerbag -- made its debut last week on the opening night of the Paris shows.

A shrunken version of the miniature and already cult $500 (440-euro) "Le Chiquito" bag --  which the likes of Rihanna and Kim Kardashian have been spotted clutching between their thumb and forefingers -- it is a mere 5.2 centimetres (two inches) long.

Jacquemus has sold "tens of thousands" of Le Chiquito bags in the last year, according to Cosmopolitan magazine, with fashionistas so desperate to get their fingers on them that there are lengthy waiting lists for some colours.

Although the brand told AFP that they have yet to set a price for Le Mini Chiquito, if the reaction on Instagram and Twitter is anything to go by, demand could be equally brisk.

Fashion insiders have been laughing at themselves as they lap up the latest Lilliputian trend.

The hip style magazine Dazed declared "Jacquemus, your tiny bags are getting kind of ridiculous but we love them!" while Elle magazine headlined it as the "New It Bag" before quickly admitting that it can only hold an AirPod earphone.

One fashion editor tweeted five uses for the bag including carrying "loose floss, a spare acrylic nail or a singular lock of curled hair retrieved from the head of Jude Law" circa 1999.

Another said it was "the perfect size to put probiotics and digestive enzymes", while a third thought it would be a snug fit for "Donald Trump's conscience".

Me, off to work carrying my lunch in my Jacquemus Mini Le Chiquito bag pic.twitter.com/gFgPs1FECm

What are they used for ? Two tablets of panadol ?

A peanut. Maybe two if I'm in for a wild night. https://t.co/mTQiGFVWOg

Jacquemus' 29-year-old founder, Simon Porte, has quickly made a name for himself on the Paris catwalk with clothes summoning up the sensuality of his Provencal home in the South of France, putting women in huge straw hats and tiny dresses that show lots of thigh.

His personal charm, and his label's relatively affordable prices, has quickly won him a following.

He made breakfast for critics at his menswear show in January, and gifted some fashion critics one of his new micro bags with their invitation for his latest show.

Porte, who loves playing with proportions, first made a splash with his huge tote and shoulder bags, some of which also featured alongside his Le Mini Chiquito in his Paris show.

Viral Video: Cat's Dramatic Reaction To Smelling A Newborn Baby Will Amuse You