After an early morning yoga session on International Yoga Day, the union minister posted a picture to Instagram which is going viral for all the right reasons. 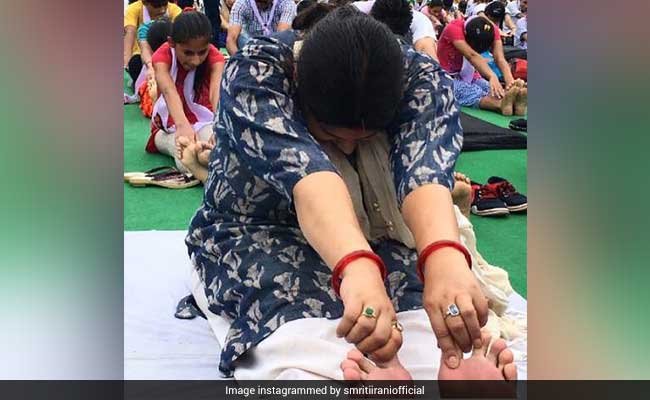 In the picture, Ms Irani is bent over and touching her toes. In the caption accompanying the picture, she asks, "Who said fat can't be flexible" followed by a host of emojis.

Posted nearly five hours before writing this, the picture has received over 4,600 'likes' and a flurry of overwhelmingly positive comments in response.

"Tell me about it," quips television actor Delnaaz Irani.

"Slaying it. Awesome," comments an Instagram user on the picture. "Not bad at all," writes another.

"But who says you are fat," asks a third. "You are healthy fit and flexible..."

Ms Irani also posted more pictures of Yoga Day celebrations on Twitter, writing after yoga in the rain, it was "time for some chai pakodas."

After yoga in the rains, time for some chai pakodas pic.twitter.com/8MmKtzwz5I

In Ahmedabad, yoga teacher Ramdev and BJP chief Amit Shah led the Yoga Day celebrations. About 5 lakh people turned up to do yoga at 5.30 in the morning. The event set a world record.

Similar events are being held in 180 nations across the world today.Click for more trending news