Frozen Fish Comes Back To Life In Video Gone Viral 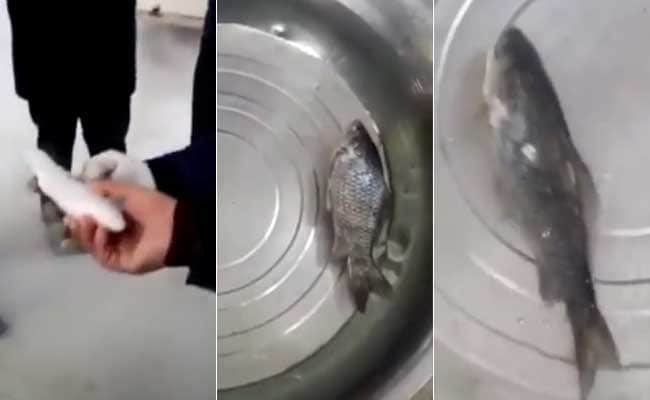 Facebook users have a lot to say about the viral clip.

NEW DELHI: Oh, what sorcery is this? A video going insanely viral on Facebook shows a frozen fish, pulled straight out of a refrigerator, springing back to life and swimming in a tub of water. Shared on the 'NTD Television' Facebook page, the video has collected almost 6 million views within 20 hours. Versions of the video have been circulating online for a while now. However, this reposted version seems to have invoked quite a few reactions from people on the social networking site.

Footage in the clip shows a man opening a refrigerator and taking the fish out. You can see the fish white as snow since ice covers it completely. It also doesn't seem to be moving at all.

The man then puts it in a huge container which already has a black fish in it. The frozen fish seems to instantly thaw and you can now see that it's actually silver in colour. Moments (that pretty much feel like an eternity) later the fish moves a fin and springs back into action. It begins swimming around the vessel just like the black one.


Along with the millions of views, the video has also collected over 85,000 reactions and almost 70,000 shares so far. Facebook users have a lot to say about the entire clip.

While some claim the video shows animal cruelty, others have offered explanations for the video.

"Clearly the fish wasn't 'frozen' for very long. Still not sure what's so funny about animal cruelty," says one commenter on Facebook.

"Saw this in real life back in the fifties while living in a house with heat from the kitchen stove. The other rooms dip to freezing point over night. In the morning we found our goldfish frozen in its bowl. Crying over the loss of our pet, my big sister took it to the bathroom, I thought to flush it down the toilet. I heard running water and soon she came back into the room with Goldy swimming happily in its bowl. She was my hero," says another.

Some even tried to use humour to make light of the video.

"Just tried it with my fish fingers and not only didn't they come back to life but they made my sandwich soggy," says one Facebook user.

Some had other issues... not about the video per say...

"Fish was completely frozen and then thrown into what looks to be warm water and lives. Meanwhile I can't keep a goldfish alive for 6 hours in a cozy fish tank!" says another.
Comments
Viral video