From Curious Pets To Demanding Kids: See The Funniest Bloopers On TV

These hilarious videos will make your day. 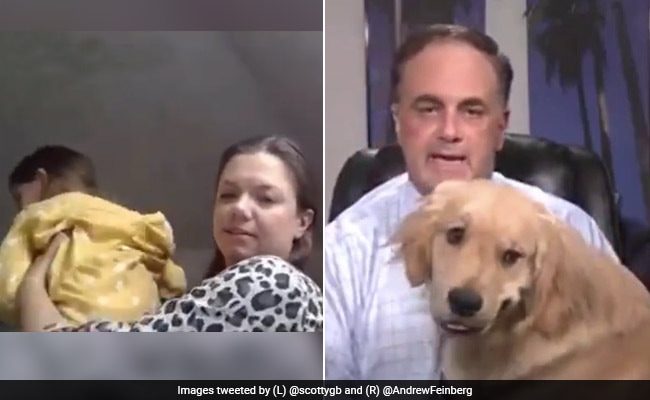 Watch the funniest bloopers to happen on television.

Unruly pigs, attention-seeking dogs and aggressive monkeys - it's all in a day's work for these television personalities. Recording a TV show is not easy to begin with, and it only gets tougher when you throw distractions like these into the mix. But these brave reporters took it all their stride and emerged unscathed from their ordeals - though they did give the world much to laugh at in the process. Take a look at some of the funniest bloopers ever seen on television.

No one can match up to 'BBC Dad' when it comes to hilarious bloopers. In 2017, Korea-based professor Robert Kelly gave the Internet a gem of a video when his daughter sauntered into her father's office while he was in the midst of a very serious interview with the BBC. She was followed closely by her younger brother - a toddler in a stroller - and then their mother rushing in frantically to sweep the curious children away.

???? 1 year ago today the world became a better place.#BBCdadpic.twitter.com/Q5I70XxT7T

It wasn't the only time a child gatecrashed an important BBC interview. Only a few weeks ago, a live interview on BBC News between Dr Clare Wenham and anchor Christian Fraser was hilariouslyderailed when Dr Wenham's daughter interrupted their discussion, demanding to know the news anchor's name.

That hilarious interview was put down to the perils of working from home during the pandemic, and it wasn't the only one. In April, a reporter from Florida learned the hard way the drawbacks of 'work from home' when her shirtless father walked into the frame as she was filming a segment.

Work from home they said, it'll be fine they said. pic.twitter.com/e2eK6IH6r5

After that, in May, an attention-loving dog interrupted his owner's weather report in the kind of wholesome 'work from home' blunders that the Internet absolutely loves. Brody the golden retriever became an Internet sensation with the video, which you can watch below:

This is the best weather forecast in the history of television news pic.twitter.com/LhmoJDCkbZ

But while Brody is the kind of cute pet that has everyone saying "aww", not all animals are as... docile. Last year, a reporter for Good Morning Greece was chased by a pig on live TV - leaving his colleagues and social media viewers in splits.

Greek journo pestered by a pig while reporting on the recent floods in #Kinetta#Greece#tv#bloopers#ant1tv#Ant1newspic.twitter.com/vsLBdlWCMB

And speaking of aggressive animals chasing TV anchors, have you seen this video of a monkey that chased a host right out of the studio? The monkey was brought to the studio by a guest being interviewed by Egyptian TV host Lobna Asal. While initially well behaved, it soon changed colours and began scratching her legs, sending her scrambling out of the studio. She returned soon after - completely unhurt - while the monkey was led away.

Which video made you laugh out loud? Let us know using the comments section.

Robert Irwin Shares Video That Shows Him Being Attacked By Snake