'One Year Of Internet Stardom', BBC Dad Reflects. Video Is Still A Hit

"1 year ago today the world became a better place," BBC tweeted about the video 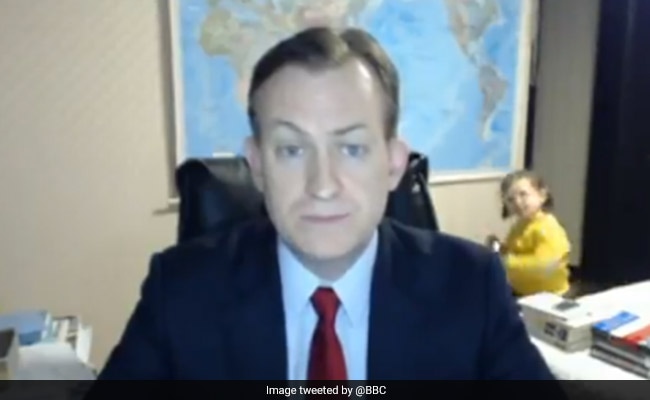 On March 10, 2017, Korea-based professor Robert Kelly and his family gave the Internet its favourite TV moment ever. Then 4-year-old Marion and 9-month-old James (on his walker) burst into their father's office while he was in the midst of a very serious interview with the BBC on South Korea's political situation. The helpless father tried his best to continue, with his wife Kim Jung-A's help who came running after the children, but the little ones were determined to have their moment under the limelight. Parents worldwide could relate to it, others found the comedy of errors too funny to not share. Hence, giving birth to 'BBC Dad', one of Internet's most unforgettable moments from 2017.

It's the first anniversary of 'BBC Dad' and the clip is still a laugh riot and very much viral. BBC re-shared the clip on Twitter and it is still going strong with 6 million views in just a day.

"1 year ago today the world became a better place," the network tweeted with a video for you to relive the moment.

1 year ago today the world became a better place.#BBCdadpic.twitter.com/Q5I70XxT7T

Lmaooo. I'll never forget this. Lawd so much epic funny in it....from the little girl coming in, the baby in the walker-stroller, the mom flying in trying to get kids and close door https://t.co/uXOz6YTpdm

More and more you look at it, it's just perfect comedy. https://t.co/pSMt1pMu8S

This video is still one of my favourites of all time. The way she strolls into that room, I want to enter every room that I enter with the same amount of energy/vibrance! https://t.co/I0mhkmoZO7

A year after the Kelly family was catapulted into Internet stardom, Robert Kelly has reflected on the moment and how life has changed since that eventful interview. In a blog post published earlier today, Robert Kelly said life as being "virally famous" has been mostly fun. The Kelly family, he wrote, have lost their anonymity and are recognised "a lot" everywhere. Another outcome of being "quasi-celebrities" is that BBC Dad can no longer go out wearing grungy clothes, he wrote.

He also said many parents juggling work and domestic life, parents who work from home wrote to them with mostly positive reactions.

"These reactions were positive and empathetic. We were very moved by them," he wrote.

He even addressed, again, the question he is asked till date about the massively viral video.

Did he not stand up on-air because he was not wearing pants?

Well, he was wearing pants.

Promoted
Listen to the latest songs, only on JioSaavn.com
"I did not stand up because, as they say, the show must go on. Had I stood up and broken out of frame, any semblance of professionalism would have been lost. I was hoping throughout the 45-second interruption that the BBC correspondent, James Menendez, would simply end the interview and I would be saved. Hence, I held my seat," he explained.

And a year after the mistake of leaving the door unlocked, looks like 'BBC dad' has learnt his lesson as the camera no longer faces the door every time he does an interview.