The video shows the TV host trying to defend herself with a cushion as the monkey jumps and tries scratching her. 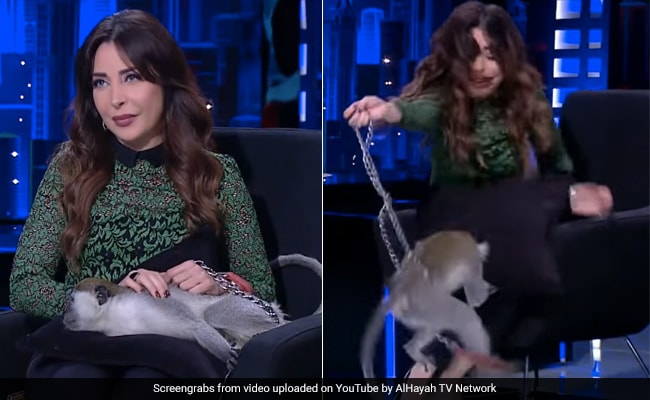 A TV host was filmed scrambling to get away from an aggressive monkey.

A monkey attack sent a TV host running out of the studio in the middle of an interview. A video that is being widely circulated online shows Egyptian TV host Lobna Asal scrambling to get out of the studio when a monkey, brought to the set by an actor she was interviewing, began scratching her legs. According to news website UPI, Ms Asal, a journalist for Al Hayat TV, was speaking to Egyptian actor Ibrahim El-Samman when the incident occurred.

The video initially shows the seemingly well-behaved monkey sitting next to Ms Asal as she conducted the interview along with co-host Hussam Haddad. The leash-wearing monkey was brought to the studio by Mr El-Samman and had starred in his latest project, reports Daily Star. However, after enjoying a few pets, the monkey turned on Ms Asal and began attacking her.

The video shows her trying to defend herself with a cushion as the monkey jumps and tries scratching her legs. She is then seen pushing the animal away and running out of the studio as someone arrives to control the errant monkey.

Since being shared on YouTube three days ago, the video has collected over 47,000 views and several amused comments.

This is not the first instance of an animal disrupting a TV show that has left viewers in splits. Recently, a weatherman working from home amid the pandemic had to contend with his attention-seeking golden retriever gatecrashing his report. After that, a politician in Spain became the subject of many jokes when an ostrich wandered up behind him during a press conference.