The ostrich showed up behind the oblivious politician even as he continued talking. 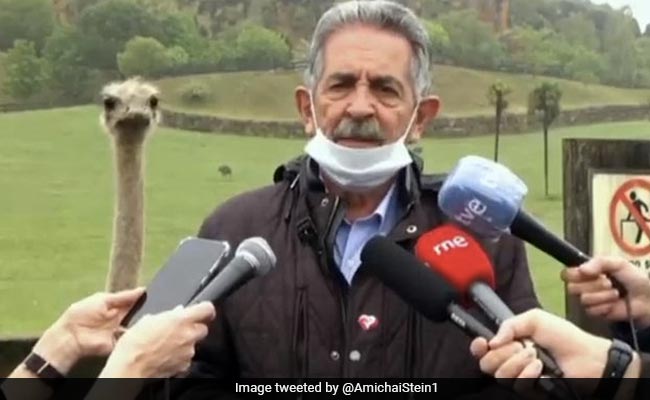 An ostrich showed up behind Spanish politician Miguel Angel Revilla during a press conference.

Hilarious footage that is being widely shared online shows a curious ostrich looking over the shoulder of a Spanish politician during a press conference. The incident occurred when Miguel Angel Revilla, the President of Cantabria in northern Spain, visited Cabarceno Natural Park zoo to announce its reopening, reports Daily Mail. While Mr Revilla was speaking to reporters at the reopening of the zoo, an ostrich showed up behind the oblivious politician even as he continued talking and gave the Internet a hilarious video in the process.

The huge bird was filmed gawking at the crowd of people curiously while Mr Revilla, 77, continued addressing reporters in all seriousness, not noticing the bird.

Footage of the ostrich videobomb has been widely shared on social media, where it has amused many. Take a look at the video below:

While footage of the incident amused thousands of viewers, Mr Revilla took it sportingly too. He shared a screenshot of Homer Simpson with an ostrich behind his shoulder and wrote, "The Simpsons already predicted it."

During the press conference, Mr Revilla said the reopening of Cabarceno Natural Park zoo in the town of Cabarceno is one more step toward the the reopening of the economy once the 'pandemic is controlled'. Spain is slowly easing some of the restrictions it had imposed to contain the spread of coronavirus.

Meanwhile, this is not the only instance of animals interrupting a press conference or news report. In November last year, reporter Lazos Mantikos was chased by a pig on live TV.