Goodbye, Jeans. The Pandemic Is Ushering In An Era Of Comfort.

Once the ultimate in comfort and casual wear, jeans have been usurped by more comfortable - and stretchier - options. 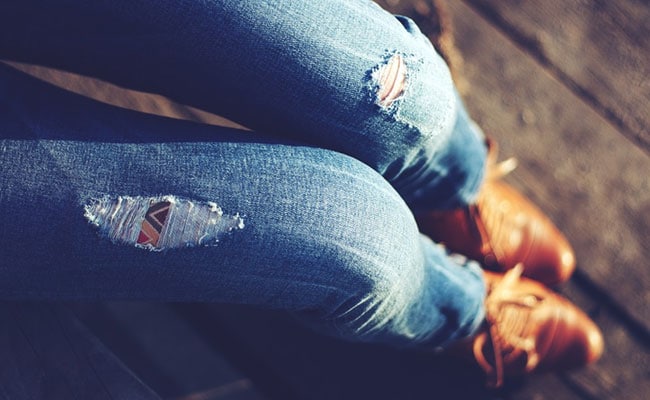 Jean sales have been sluggish for five years, but the pandemic has taken a real toll.

She has dozens of pairs - skinny, high-waisted, ripped - but after months of soft fabrics and elastic waist bands, she's swearing off denim for good.

"I haven't worn a single pair of jeans since the pandemic started," said Munoz, 46, a translator in Manhattan. "They're looking at me sadly from the closet, but it's like, 'You know what? I'm not wearing those anymore.' Why was I punishing myself?"

Once the ultimate in comfort and casual wear, jeans have been usurped by more comfortable - and stretchier - options. White-collar workers who are logging in from home say they're increasingly reaching for basketball shorts and yoga pants to pair with more professional-looking tops for video calls.

Jean sales have been sluggish for five years, but the pandemic has taken a real toll. True Religion, Lucky Brand and G-Star Raw have all declared bankruptcy since early June, while the parent company of Joe's Jeans and Hudson Jeans filed for Chapter 11 protection in May. Levi's this month posted a 62 percent drop in second-quarter revenue and announced plans to cut 700, or 15%, of its corporate workforce.

"People just aren't wearing jeans right now," said Tiffany Hogan, an apparel analyst for Kantar. "They're living in comfort as much as they can, which is accelerating a trend we were already seeing."

Meanwhile, "athleisure" retailers like Lululemon are getting a lift from leggings and joggers sales for both men and women even as overall receipts fell 17 percent last quarter. Gap, which owns Athleta, is reporting an uptick in sales of joggers, leggings and men's sweatpants.

Apparel sales have dropped nearly 40 percent this year, Commerce Department data show, as consumers pull back in just about every category of spending. Roughly 30 million Americans are collecting unemployment benefits, according to the data released last week by the Labor Department, and countless others say they're worried about the recession's long-term effect on their personal finances.

"Consumers are certainly more conscious about how they spend their money," said Wendy Liebmann, chief executive of New York consultancy WSL Strategic Retail. "Even if they are managing at the moment, people are looking at their closets and saying, 'How much more do I really need?'"

Plus, she said, with many stores and fitting rooms still closed, it's easier to buy a pair of sweatpants online than it is to gauge the size, fit and feel of a pair of jeans.

Denim sales have fallen by double-digits in the past three months, compared with the same period last year, according to market research firm NPD Group. Last year Americans spent about $17 billion on jeans, or 5% less than the nearly $18 billion spent in 2014, according to data from Euromonitor International. Sales of "super premium" jeans - brands like 7 For All Mankind, True Religion, Joe's Jeans and Hudson which can cost upward of $200 a pair - slid more than 40% during that period, as Americans traded down to lower-priced denim and athletic wear.

"Casual is really what's winning right now," said Maria Rugolo, an analyst for NPD Group. "Activewear is become more acceptable and if customers are looking to extend their wardrobe, they're more likely to buy something with multiple uses, that they can wear for work, leisure and working out."

Recent bankruptcy filings by the companies behind Brooks Brothers, Men's Wearhouse and Ann Taylor are an extension of that trend, analysts say, as Americans turn to less structured clothing for both work and relaxation.

In Sherman Oaks, Calif., Rocío Rodríguez says she's wondering why she didn't do away with jeans sooner. She's spent the past several months in pajamas and a fluffy purple robe. When she has to take a video call for work, she keeps the camera off, she says, "so I can look horrible in peace."

"Jeans are cardiovascular prisons," said Rodríguez, 28, an operations manager for a salon and medical spa. "As much as I like the look, I don't find myself waking up everyday thinking, 'wow, I can't wait to put on my jeans.'"

Matt Nicholson used to wear jeans almost everyday to his job in midtown Manhattan. But since he began working remotely in mid-March, he's been relying on a rotation of sweat shorts to keep him going.

"My jeans are rolled up on top of my hamper from 100 days ago," the 33-year-old said. "And now I don't want to try them on because God knows they probably don't fit."

He didn't reach for them, he says, even when his laundromat closed for a month at the beginning of the pandemic, leaving him with few clean options. "It got a little dire," said Nicholson, a social media director for the actor George Takei. "But we just wore our bathing suits instead."

Nicholson says he's always found jeans uncomfortable and restrictive but kept about a dozen pairs from Levi's and Diesel in his rotation because they looked good. Now, though, he says, his sartorial concerns have fallen by the wayside. Instead he cycles through nine pairs of sweat shorts in different colors that he bought on Amazon. (Amazon's founder and chief executive, Jeff Bezos, owns The Washington Post.)

"I've given up a little bit in the style department but at least I've got flashy masks," he said. "This is a real moment to address our comfort. It's time to free the leg."