Man Proposes Girlfriend By Planting Carrot Inside A Diamond Ring

As the groom-to-be grew the carrot in a 5-gallon bucket, he had no idea if it would grow inside the engagement ring as planned. 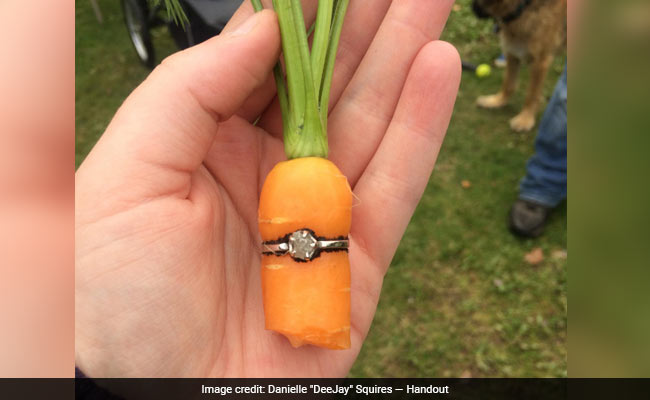 Danielle "DeeJay" Squires holds her engagement ring on a carrot.

Canadians John Neville and Danielle "DeeJay" Squires have been together for about six years. They've been busy with two small children in the past few months and years, but they figured they'd tie the knot someday.

"I always knew we would, but neither of us was in any rush," Neville said.

When Squires was pregnant with their son four years ago, Neville secretly bought her a diamond engagement ring. He held onto it, trying to find just the right time to pop the question.

"I'm a procrastinator like you wouldn't believe," Neville, 36, said. "I kept twiddling my thumbs."

In June, Neville decided he had waited long enough and pulled out the ring from the work shed behind their home in Newfoundland and Labrador, Canada. 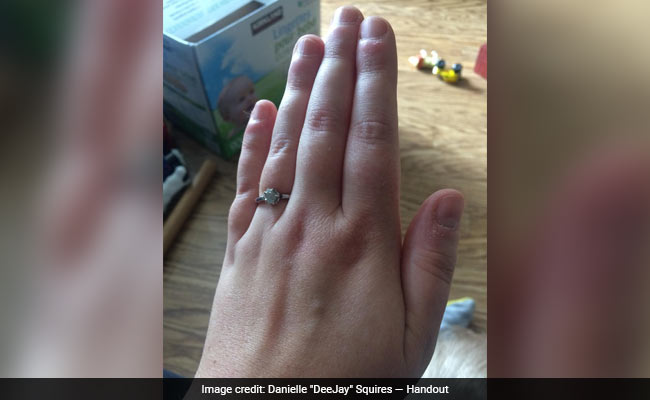 He wanted the proposal to be just right, and he couldn't get out of his head a news story he had seen a couple years ago in which a Canadian woman found her lost diamond ring in a carrot while she was gardening.

He wanted to grow a carrot inside the diamond ring he bought for Squires.

Neville, a stay-at-home-dad, keeps chickens, pigs and other animals in their backyard, and also grows various vegetables and herbs. If anyone could grow a carrot in a ring, he felt confident it would be him.

"It was a bit of a process," he said. "I put a lot effort into it to make sure it was a successful engagement proposal." First, he filled a five-gallon plastic bucket with soil but left a little room at the top. He then placed the ring in the center of the bucket and he pushed the ring down to bury it. He used a pencil to make a narrow hole in the soil right through the center of the ring, hoping to encourage the carrot to grow in that spot.

"I gingerly put a few granules of soil there and then three or four seeds on top," he said.

He sprinkled the rest of the carrot seeds around the perimeter of the bucket. Then he waited about 90 days. He said the bucket didn't need much tending.

On Saturday, he decided it was the day. He could see the carrots were maturing, and he didn't want them to get too big.

He pulled out the bucket and asked Squires, 32, and their 3-year-old, Eric, for help harvesting them.

Eric pulled a few from the outer edge of the bucket and Neville noticed, to his relief, that they looked well formed. Then he asked Squires to pull out the one in the center. He had no idea whether the carrot had grown inside the ring, whether his gamble had worked.

As she yanked on the carrot, Neville got down on one knee and blurted out: "I love you. Will you marry me?"

Neville registered confusion on Squires' face. It took her a moment to realize the carrot she was holding also contained an engagement ring. His gamble had worked perfectly. Their son took a bite from the tip of the carrot.

"She was a little bit confused for two seconds," Neville said. "Then her eyes started welling up and she nodded her head yes."

Squires said she was in shock when he proposed because she was not at all expecting it in that moment. Their son kept asking why she was crying.

"The more I think about it, the more amazing it is," she said.

Squires, a technologist in a hospital lab, said that after she posted on a Facebook group they are members of, Backyard Farming & Homesteading NL, people keep asking her when they plan to marry.

"We're not really sure," Squires said, adding that she's been getting a lot of attention since Neville's clever proposal. "It's been quite an experience, for sure."