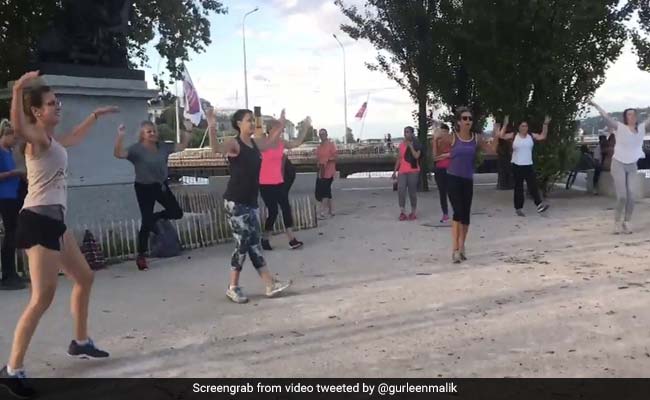 A group of women in Switzerland were filmed doing the bhangra to G.O.A.T.

When singer and actor Diljit Dosanjh released the title track of his much-awaited album G.O.A.T. in July, it immediately sent the Internet into a meltdown. The popularity of the catchy track continues to grow, and it has now reached Switzerland too. A video that is being widely circulated on social media shows a group of women in Switzerland doing the bhangra to G.O.A.T.

The video was shared on Twitter by Indian Foreign Service officer Gurleen Kaur on Monday and later retweeted by Diljit. In it, a group of women can be seen doing the bhangra in what appears to be a class led by Karanvir Singh. The women were seen shaking a leg to the Punjabi track G.O.A.T.

"When Europeans groove on @diljitdosanjh's G.O.A.T!" wrote Ms Kaur while sharing the 45-second clip. "Indian Bhangra in #Switzerland," she added. Watch the video below:

Since being shared one day ago, the video has garnered over 21,000 views and hundreds of comments and 'retweets' - including one from Diljit.

Take a look at some of the reactions that the video has collected:

G.O.A.T. has gone viral with over 55 million views on YouTube alone. The lyrics of the song have been written by Karan Aujla and the video has been directed by Rahul Dutta.

This is not the first time that one of Diljit's songs has made it big overseas. In May, he had shared a video of residents of a UK neighbourhood street dancing to his song Veervaar.