Bhangra On The Streets Of Britain Impresses Diljit Dosanjh. Watch

A viral video shows a man performing to a Punjabi song as his neighbours follow his lead. 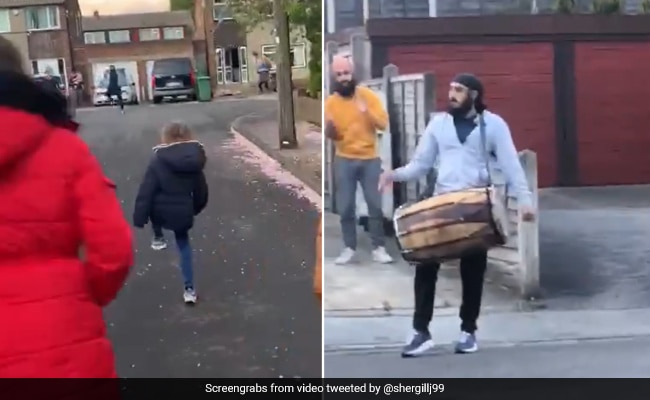 Bhangra on the streets of Britain has delighted social media.

With social distancing becoming the norm of the day, people are coming up with creative ways to socialise with friends, family and neighbours during the ongoing coronavirus pandemic. In the midst of the pandemic, street dancing in residential neighbourhoods has emerged as a way to spread cheer and keep spirits up during the crisis. One such street dancing video, which shows people in Britain doing the bhangra, has delighted social media users.

Some residents of a UK neighbourhood were recently filmed dancing to the Punjabi song 'Veervaar' by Diljit Dosanjh. Twitter user '@shergillj99' shared a video that shows him performing bhangra to the peppy number and leading a group of dancers that stands down the road from him.

"Mum got me dancing for the street," he wrote while sharing the video on the microblogging platform. He also shared a video that shows him playing the dhol for his neighbours, who are seen dancing to its beat.

Watch the videos below:

Had me playing Dhol aswell ???? pic.twitter.com/51BR0yahMU

The videos have been widely circulated online, winning the Twitter user praise for his neighbourly deed. They have collected tens of thousands of views on the microblogging platform, along with 1,700 'retweets' and more than 7,000 'likes'.

Footage of the bhangra dance also impressed Diljit Dosanjh, who sang the original song. The actor and singer gave a shout-out to the performance on Twitter.

Many other social media users joined him in complimenting the street dancing.

Last month, residents of a street in Cheshire, UK, were also filmed holding a dance party on their streets during the lockdown.

Chris Evans Gave His Dog A Haircut In Quarantine. It Went "So Wrong"