#VirushkaReception: Twitter didn't forget to do what it does best - makes jokes 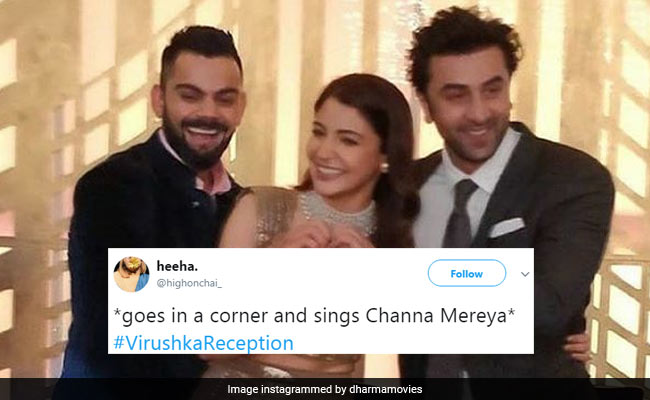 What was undoubtedly the wedding of the year is finally over. Anushka Sharma and Virat Kohli, who tied the knot in Italy weeks ago, wound up their wedding celebrations with a star-studded reception in Mumbai last evening. But of course you know that already what with your Instagram and Twitter feed overflowing with posts and updates from the grand celebration. From the couple's wardrobe for the night, to the celebrities in attendance, to all the videos of the newly-weds dancing the night away, social media can't keep calm and carry on when it comes to Anushka and Virat's Mumbai reception. However, in all the ooh-ing and aah-ing over the pictures and videos, Twitter didn't forget to do what it does best - makes jokes on the #VirushkaReception.

We've rounded up some of the most hilarious tweets about Anushka Sharma and Virat Kohli's Mumbai reception below. These are sure to make you laugh out loud.

There were lots of Ae Dil Hai Mushkil jokes

*goes in a corner and sings Channa Mereya*#VirushkaReceptionpic.twitter.com/pQ85yOhQQg

To sing Channa Mereya or not #RanbirKapoor#VirushkaReceptionpic.twitter.com/NjHAXbMM8H

Some pics are so funny #VirushkaReceptionpic.twitter.com/F0r0fAuC8q

And this one about Anushka

She's such an adorable kid#VirushkaReceptionpic.twitter.com/c4BNDLMvFi

This person who found himself at the reception

This guy is me at every wedding ever pic.twitter.com/szZoNcGYsQ

There were tweets about the receptions... or the number of them

Informed sources on a condition of anonymity have told that post reception in Delhi & Mumbai, Anushka and Virat shall be holding receptions in Salem, Panipat, Nasik, Hoshangabad, Meerut, Saagar, Asansol, Coimbtore and 671 other cities & towns #VirushkaReception

Hey, we're not complaining. We just wish we were invited in one

Virat and Anushka hosted the first of their two wedding receptions in Delhi on December 21. Virushka, as they're popularly called, got married in a private ceremony in Italy earlier this month. The newlyweds are slated to fly to South Africa next. While Virat will prepare for an upcoming series, Anushka is scheduled return to Mumbai after New Year celebrations and resume her pending work commitments.Click for more trending news