15 Of The Best Tweets On Anushka-Virat's Wedding

Even before Anushka Sharma and Virat Kohli announced their wedding, the hashtags #VirushkaWedding and #VirushkaKiShadi began trending. 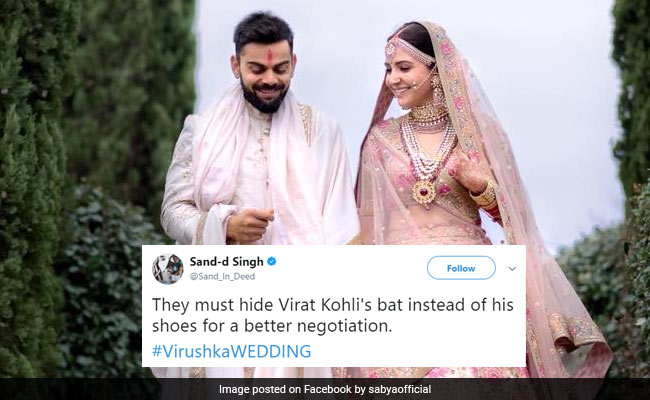 Virat Kohli and Anushka Sharma tied the knot in Italy on Monday, sending the Internet into meltdown mode

New Delhi: It's official! Bollywood actor and producer Anushka Sharma and Indian cricket team captain Virat Kohli got married in Italy on Monday. But hours before they made it official via statements on Twitter and Instagram (with pictures from the stunning wedding ceremony), the Internet was already in meltdown mode. The hashtags #VirushkaWedding and #VirushkaKiShadi started trending on Monday evening and are still going strong on Twitter's top trends, even today. Anushka and Virat posted two different pictures of themselves smiling together and dressed in gorgeous Sabyasachi outfits. "Today we have promised each other to be bound in love forever. We are truly blessed to share the news with you," the newlyweds wrote, adding that it had been a "beautiful day." And while Twitter couldn't be happier for the couple, there were plenty of witty takes on Virushka's wedding.

We scoured through Twitter to find you 15 of the best tweets on Virat Kohli and Anushka Sharma's wedding.

A lot of jokes were made about the Manyavar ad campaign that features the couple.

Not sure if legit pictures or Manyavar ad campaign

Virat and Anushka are officially hitched! That Manyavar brand deal contract sure had some serious deliverables.

#VirushkaWedding is for Manyavar what Demonetization was for PayTm

All desi moms had the same reaction.

Virat and Anushka got married

There were plenty of cricket-related jokes.

They must hide Virat Kohli's bat instead of his shoes for a better negotiation.#VirushkaWEDDING

From now onwards @imVkohli will happily be the vice captain at home ... hail the new captain @AnushkaSharma .... once again wish you a happy married life. pic.twitter.com/F6Eg5wFbtd

The timing of Anushka & Virat's tweets though

People couldn't help but quip about how the Virushka love story began.

Some joked about Virat and Anuskha's destination wedding.

Kids: Gets Married, plans a honeymoon.

Adults: Plans a honeymoon, gets married.

Legend: Gets Married at honeymoon location.#VirushkaWedding

Why Viruskha? Why not Korma?

By the way, why is Virat Kohli marrying Anushka Sharma being called #VirushkaWedding.
Why not #Korma?

Frankly, news of Anushka Sharma and Virat Kohli's wedding made everyone smile and provided a lovely distraction... if only for a while.

Virat & Anushka putting the nation first with #VirushkaWEDDING.
Giving us 2 hours relief from Indians going on and on about how their political or religious view is only way.
And, all else sucks.

In a statement to the press, Anushka and Virat announced they will be hosting a reception in New Delhi for relatives on December 21, followed by a grand celebration in Mumbai on December 26 to be attended by Bollywood stars and cricketers.

Later, Anushka will accompany Virat to South Africa where he will prepare for India's forthcoming tour there which is taking place early next year.

Promoted
Listen to the latest songs, only on JioSaavn.com
After spending New Year's Eve together, Anushka will return to Mumbai in the first week of January to resume shooting for a film with Shah Rukh Khan and Katrina Kaif.

Virat and Anushka started dating in 2013 after they met during the filming of a shampoo advertisement. Click for more trending news