3 Million Likes And Counting: Is Virushka Wedding Pic Headed For A Record? 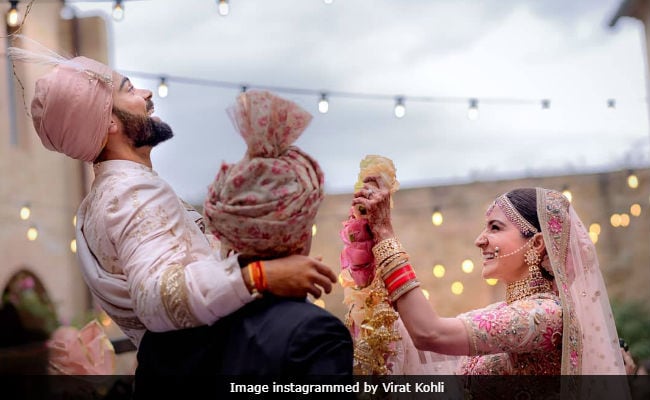 Anushka Sharma and Virat Kohli tied the knot in Tuscany, Italy on Monday. Their wedding pics are viral

New Delhi: Bollywood actor and producer Anushka Sharma and Indian cricket team captain Virat Kohli tied the knot in Tuscany, Italy. And hours later, made it Instagram-official. Even before Anushka and Virat's wedding was confirmed, Twitter went into meltdown mode. The hashtags #VirushkaWedding and #VirushkaKiShadi started trending yesterday and are still going strong on Twitter's top trends today. Along with the official announcement last night, Anushka and Virat posted two different pictures from the wedding ceremony. Anushka posted a lovely candid image of the two sharing a light moment during the wedding rituals. Virat, meanwhile, posted a playful moment as they exchanged flower garlands during the Jaimala ceremony.

"Today we have promised each other to be bound in love forever. We are truly blessed to share the news with you," the newlyweds wrote, adding that it had been a "beautiful day."

Of the top 10 most liked photos on Instagram this year, at number 10 was a picture from pop star Selena Gomez's 25th birthday four months ago. It racked up well over seven million 'likes.'

Though we're sure Virat and Anushka won't be particularly heartbroken if they don't set an Insta-record with their wedding pics, they're clearly no strangers to the million-likes club. (Something us mere mortals can only dream of!)

Remember this belated Valentine's Day selfie of Virat and Anushka?

Posted a day after Valentine's Day, it was the first time ever that the couple made their relationship so public after reports of a brief separation in 2016. Virat's caption basically melted a million hearts: "Everyday is a valentine day if you want it to be. You make everyday seem like one for me Anushka Sharma." And that pic collected over 1.7 million 'likes.'

Then there was this photo collage dedicated to the two "strongest women" in Virat's life.

On Women's Day, Virat had special messages for both his mother and then-girlfriend Anushka: "My mom for looking after the family in toughest times in life and Anushka Sharma for fighting against the odds regularly and standing up for righteousness and changing the norms." Cue the "Awws." That pic was 'liked' over 1.4 million times.

And, of course, there's this sweet selfie which proves an emoji might be worth a few thousands words.

Promoted
Listen to the latest songs, only on JioSaavn.com
The lovebirds gave their Insta-followers a peek into their "much needed break" in New York earlier this year. The pic quickly collected over 2.1 million likes.

So, will Virat Kohli's Insta-pic of his special day set a new record? Watch this space!Click for more trending news