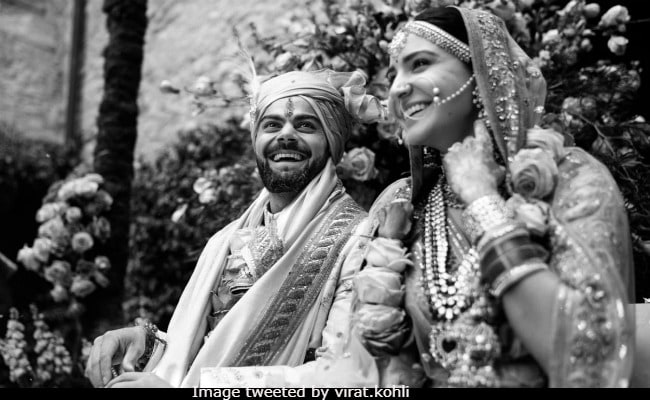 Virat Kohli and Anushka Sharma, like this forever (courtesy imVkohli)

First, congratulations Anushka Sharma and Virat Kohli! The star couple celebrated their first wedding anniversary with fans on social media with mushy posts on Twitter and Instagram on Tuesday. Anushka and Virat delighted us with never-seen-before pictures from their dreamy destination wedding and unseen footage from the wedding ceremony at the Borgo Finocchieto. The couple also sent out adorable messages to each other with their posts. "It's heaven, when you don't sense time passing by... It's heaven, when you marry a good 'man'," wrote Anushka while Virat added: "Can't believe it's been a year already because it feels like it happened just yesterday. Time has truly flown by. Happy anniversary to my best friend and my soulmate. Mine forever." Aww... our hearts are melting already.

Zeroing in on the idea of an intimate wedding, away from the hustle and bustle of Mumbai life, Anushka and Virat got married in Italy's Tuscany on December 11 last year. The video has glimpses of the var mala, the pheras and the vidaai ritual. There's also a glimpse of what appears to be the post-wedding party in Italy. Virat can be heard saying: "It's like I was a child till morning and now I've grown up suddenly."

Can't believe it's been a year already because it feels like it happened just yesterday. Time has truly flown by. Happy anniversary to my best friend and my soulmate. Mine forever @AnushkaSharmapic.twitter.com/eKL9wlpU4R

Busy stars Virat Kohli and Anushka Sharma always share loved-up posts on milestone occasions of their married life. On Karva Chauth this year, Anushka and Virat tweeted photos from their celebrations and also set major couple goals, we must say!

Anushka Sharma and Virat Kohli are currently in Australia with Team India touring the country for an ongoing series. The actress has taken a break from the promotions of Zero to spend some quality time with Virat on their first wedding anniversary. Anushka Sharma's Zero hits screens on December 21.