Now, it's time for Anushka to wish Virat on his special day! 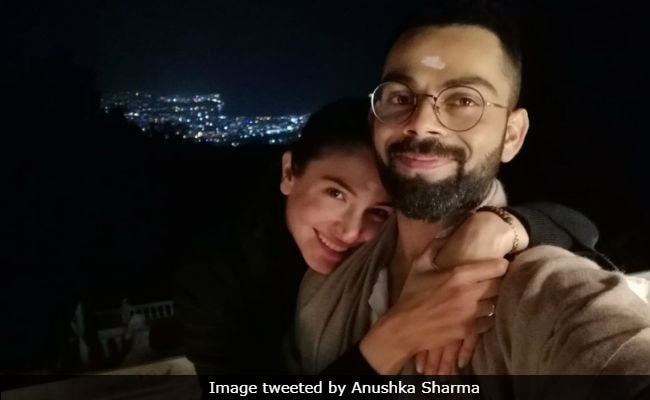 Anushka Sharma had the most awesome birthday wish for husband Virat Kohli on his 30th birthday! Sharing two adorable selfies on social media, Virat's actress wife kept the birthday wish simple and yet so nice. If you were expecting a "Happy Birthday" sort of a wish, then no, that's not what Anushka preferred and here's what she wrote: "Thank God for his birth." Aren't these two just way too cute together? Anushka Sharma and Virat Kohli married in December last year and have often featured in mushy posts on each other's timeline - don't you remember the ones on Karva Chauth? Loved up posts on Virat Kohli's Instagram, featuring particularly his wife Anushka Sharma, have often gone crazy viral in the past.

But now, it's time for Anushka to wish Virat on his special day!

Anushka Sharma, who is busy with the promotional duties of her next film Zero, sure sliced out time to celebrate Virat Kohli's special day - after all, it's his first birthday since they got married. Last month, the celeb couple also celebrated their first Karva Chauth together. Virat Kohli, who was preoccupied with ODI cricket, would not have missed Karva Chauth for the world. Sharing a glimpse from inside their celebrations, this is what he wrote: "My life. My universe. Karva Chauth." Meanwhile, this is the greeting which Anushka sent him: "My moon, my sun, my star, my everything. Happy Karva Chauth to all", Virat addressed his wife as: "My life. My universe."

Last month, Virat Kohli's super-adorable post for Anushka Sharma, after being honoured with Rajiv Gandhi Khel Ratna award, won over the Internet. After receiving the country's highest honour in sports, Virat addressed a heart-felt note to Anushka and wrote: "The person that inspires me to push forward despite all obstacles. The person that guides me to do the right thing in life against all odds. The person that has changed me inside out and made me realise the power of true love."

Virat Kohli and Anushka Sharma had a destination wedding in December 2017 in Italy and wrapped the festivities with two grand receptions - on in New Delhi and the other in Mumbai.