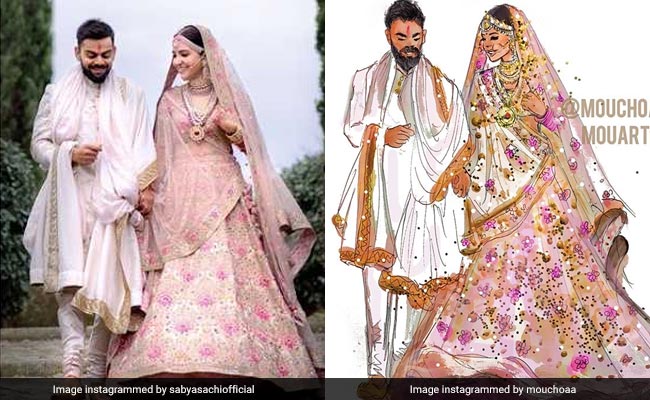 New Delhi: Many have referred to it as the wedding of the decade. Virat Kohli and Anushka Sharma's marriage, after all, brought together two of the country's biggest obsessions - cricket and Bollywood. It comes as no surprise therefore that artists all over the country - and abroad - have set about to capture in paint their dreamy photographs together. So while we wait for pictures from their two star-studded receptions on December 21 and 26, feast your eyes on these beautiful 'Virushka' illustrations:

Artist Samadrita Hazarika's dreamy, glittery take on one of the wedding pictures

This stunning illustration from Mou Nazia

Another happy portrait from Girija Sarfare

Sand artist Sudarsan Pattnaik also made a sand sculpture of the gorgeous couple together!

Congratulations to @imVkohli & @AnushkaSharma, as they embark on their New Journey together. My SandArt at Puri beach in Odisha . #VirushkaWEDDING#Virushkakishadipic.twitter.com/Cjvd2q2OHu

Anushka Sharma also took to Twitter yesterday to thank him for his sculpture:

This is so beautiful . We are both grateful, thank you https://t.co/6dvZz95Aar

Not just this, even Amul, famous for their topical advertisement, congratulated Virat Kohli and Anushka Sharma with a beautiful painting in a witty creative:

Anushka Sharma and Virat Kohli married in a Tuscan resort on December 11. They are expected to ring in the new year in South Africa after hosting two receptions - one in Delhi and one in Mumbai. According to reports, they will then move into a sea-facing apartment in Worli, Mumbai. Anushka will move out of the apartment in Badrinath Towers in Versova where she lives with her family.

Meanwhile, here are the 15 best tweets about the big fat Italian Virushka wedding.