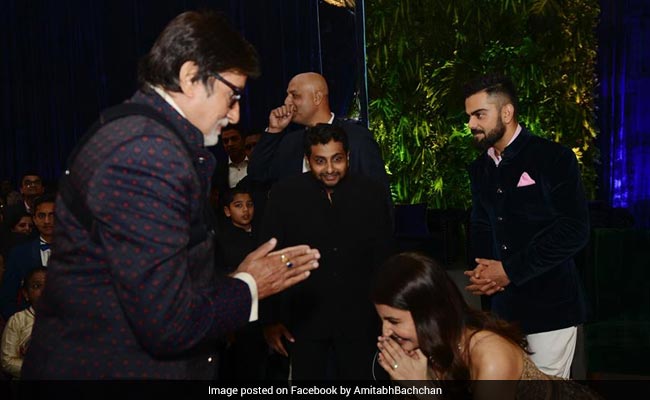 New Delhi: Actor and producer Anushka Sharma celebrated her 30th birthday on May 1. The celebrations included some cake and special wishes from India cricket captain and husband Virat Kohli, a movie date and a delightful announcement about her plans of building an animal shelter near Mumbai. However, even as her Twitter timeline was flooded with birthday greetings from friends, colleagues and fans - many of which the actor is graciously replying to - one Twitter exchange stands out. And it features none other than Bollywood veteran Amitabh Bachchan.

Remember how last year Big B had tweeted actor Sonam Kapoor about SMS-ing her his birthday wishes and not getting a reply back? Well, looks like that just happened again, except this time with Anushka Sharma.

@AnushkaSharma .. Anushka .. this is Amitabh Bachchan @Srbachchan .. wished you on May 1st via sms .. no response .. checked they said you changed number .. sent greetings again .. love and wishes .. you looked radiant at the IPL game last night

The tweet collected quite a few amused reactions with over 7,700 'likes' and almost 1,000 retweets.

Promoted
Listen to the latest songs, only on JioSaavn.com
A grateful Anushka replied to his tweet, thanking the actor for his wishes. Hilariously, she also let him know that she was replying to his SMS as well.

Thank you so much Sir, for remembering my birthday and sending your kind wishes! (Responding to your sms as I tweet this)https://t.co/dr01PUswIf

Her reply, posted four hours before writing this, has collected over 10,596 'likes' and some 770 retweets.

Twitter, meanwhile, did what it does best and posted funny reactions to the exchange.

Except that i TOTALLY replied! I just cross checked it too! You were in fact one of the first to even wish!

Well, we certainly hope no one else misses Amitabh Bachchan's message in the future. Or else... there's a stern tweet coming their way!Click for more trending news