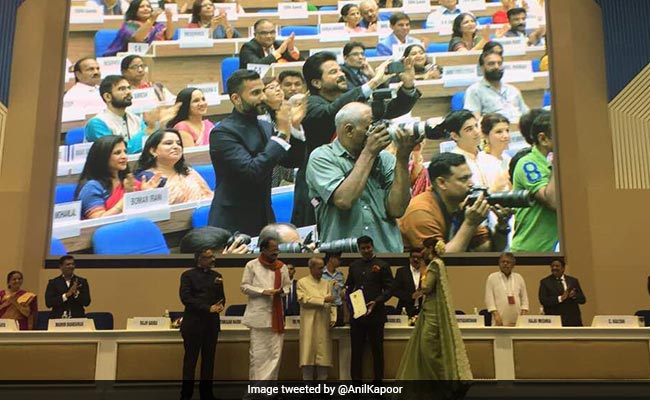 NEW DELHI: Last evening, as actor Sonam Kapoor received Special Mention at the 64th National Awards for her film Neerja, one man clearly couldn't contain his excitement. That man was none other than Sonam's father Anil Kapoor. The actor was exactly like every proud dad ever as he clicked pictures of his daughter receiving the huge honour. Pictures from the event shared online show dad Anil holding up his camera phone to capture the moment his daughter won her first National Award. He even posted about turning into a photographer on Twitter.

"Clearly cannot contain my excitement! Father turns photographer," he says in his tweet.

Since being posted last evening, Anil's tweet has collected over 2,386 'likes' and some 300 retweets.

"Aww so sweet! Proud father! No greater joy in life than seeing your kids succeed," says one commenter on Twitter. "Can see that smile, glow on your face whilst Sonama Kapoor takes the award.  A memorable and proud moment," says another.

@AnilKapoor@sonamakapoor@MIB_India What a moment ...jhakkaaasss..
Proud to u n ur daughter sir ...congrats ....@sonamakapoor !! Good luck

It didn't just end there. The doting dad posted a few more adorable photos from the celebrations post the ceremony.

Smiling ear to ear! Congratulations #TeamNeerja for giving your best and then some more! Well deserved! pic.twitter.com/90SbBjkX99

Even Sonam tweeted her daddy back:

Love you daddy.. thank you so much https://t.co/J6ipfQLBZO