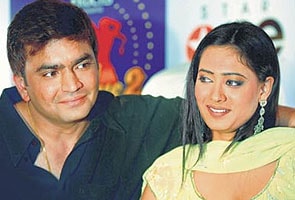 Mumbai: Cops reached the end of their tether after Bigg Boss 4 winner Shweta Tiwari lodged a fourth complaint against her former husband Raja Chaudhary. The TV actor is infamous for beating up Shweta and mauling and abusing a number of people.

Fed up with Chaudhary's terror tactics, a team of senior police officers at Malad police station has decided to extern the actor from the city, after he allegedly barged in Shweta's house on Tuesday to assault her, again.

He added, "As per court order, Raja is not supposed to go to Shweta's residence. But he breached the order. We have booked him for assaulting, trespassing, and abusing Shweta and Kohli.

He already has a number of cases against him, some at Oshiwara police station. And now we will extern him."

Shweta, who approached the police on Tuesday morning, said, she needed police protection as Raja has been doing this as a routine.

The fourth and the latest complaint lodged by Shweta claims that Raja came to her residence at Shiv Shakti society at Chincholi Bunder in Malad at around 1 am on Tuesday.

"According to Shweta, Raja abused them, as he wanted to take their daughter with him," Prabhu added. Now, Raja is all set to be a tadipar, thanks to the number of cases piling up against him.

Before this, he had created a ruckus at Shweta's house in October, when she was an inmate at the Big Boss house. He had also slapped Kohli and abused Shweta's mother.

Raja, meanwhile, is absconding. "Policemen had gone to search for him at his Lokhandwala residence, but he has fled," Prabhu said.

Incidentally, Raja was detained last year at Sao Paola, Argentina, where he was shooting for a reality show. Allegedly, he was profane to his fellow contestants while inebriated.