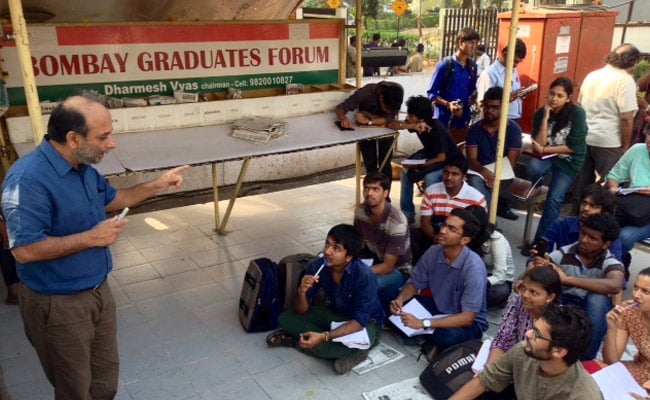 Neeraj Hatekar, a Mumbai professor, was suspended for allegedly speaking against university authorities

Mumbai: A professor suspended by the University of Mumbai took his classes today on a road outside the campus gates with about 40 students seated on newspapers, a sleepy dog also in attendance.

Dr Neeraj Hatekar, an economics professor, was suspended on January 4 after he went public against Vice Chancellor Rajan Welukar and blamed him for the downslide in the university's academic status. The university accused him of "misconduct and moral turpitude."

For days, students have protested his 'punishment' and demanded their favourite professor back.

"They come from all over the country and get disappointed when they realize I am not teaching. They wanted to learn some aspects of economics and I didn't want to spend money on hiring a hall, so here we are," Dr Hatekar told NDTV.

Students allege that Dr Hatekar, who is widely respected as a teacher of game theory and microeconomics, was punished without being given a chance to defend himself. "We can learn anywhere. We are with Hatekar sir and we will support Hatekar sir," said a student at the open air class.   (University students protest against professor's 'wrongful' suspension)

Dr Hatekar has petitioned the Bombay High Court against the "arbitrary and illegal" suspension order.

Promoted
Listen to the latest songs, only on JioSaavn.com
He has alleged that a politically-backed kitchen cabinet runs the university. "When Mr Welukar joined, the university was ranked 96, now it is 150," he said last week. (Watch: Has Mumbai University lost its glory?)

The university had defended its action. "Professor Hatekar maligned the university," said Registrar RA Khan. "Why didn't he approach us with these issues in the past three years?"