Mumbai Building Collapse: Number Of Dead Rises To 34; 15 Injured Being Treated At Hospital

The 117-year-old building in the congested Bhendi Bazaar area in south Mumbai came crashing down yesterday morning, two days after torrential rain brought the city to its knees.

Mumbai: The number of dead in the Mumbai building collapse rose to 34 today with 10 more bodies being pulled out from the debris since last night, police said.

The 117-year-old building in the congested Bhendi Bazaar area in south Mumbai came crashing down yesterday morning, two days after torrential rain brought the city to its knees.

Around 15 people injured in the collapse are undergoing treatment at the state-run JJ Hospital, a senior police official said. The dead include 24 men, nine women and a 20-day-old baby, the police said.

The search operation by personnel of the fire department, National Disaster Response Force (NDRF) and Mumbai's civic agency were on a war footing as they pulled out 10 bodies from under the rubble since last night.

Located in the congested Pakmodia Street, the dilapidated Husaini Building housed several families and godowns. It also housed a play school but children had not arrived yet when the tragedy occurred. 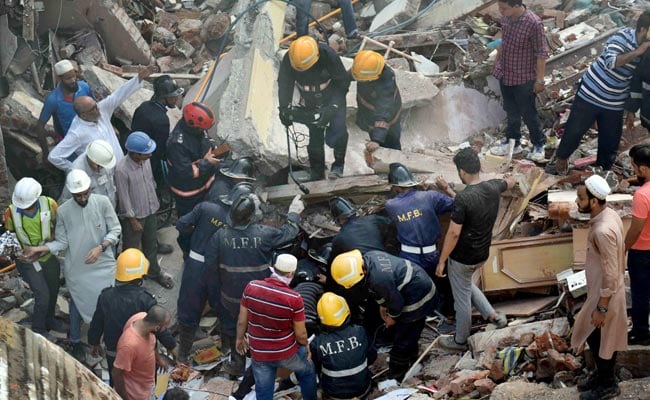 According to fire department officials, some nine families lived in the five-storey building. The officials said that efforts were underway to rescue more people who might be trapped in the debris.

Some residents claimed that around 40 people belonging to nine families lived in crammed rooms in the structure, which was declared "unsafe" by the Maharashtra Housing and Area Development Authority (MHADA).

The Saifee Burhani Upliftment Trust (SBUT), which was to have undertaken redevelopment of the old structure, said the building housed a total of 13 tenants -- 12 residential and one commercial. "Of them, the trust had already shifted seven families in 2013-14," it said in a statement.

"MHADA notices dated March 28 and May 20, 2011, declaring the building dilapidated, were issued along with an offer of transit accommodation to the remaining tenants and occupants," it said.

Maharashtra Chief Minister Devendra Fadnavis yesterday visited the spot and announced a solatium of Rs five lakh each for the next of kin of the deceased. He also said that the entire medical expenses of those injured will be borne by the state government.