the RRB published a notification and said the Computer Based Aptitude Tests for CEN 01/2018 and CEN 02/2018 recruitment will commence in August / September, 2018 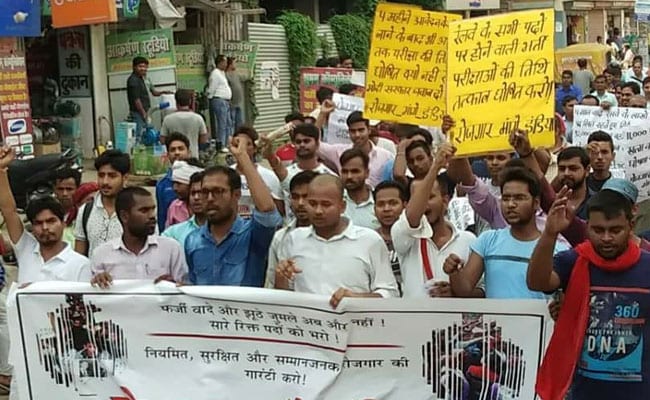 Hundreds of job aspirants protested against the 'callous attitude' of Railway Recruitment Board (RRB) of Indian Railways in declaring the exam dates for more than 89,000 vacancies the board announced in February this year. Job seekers under the banner of Rozgaar Maange India protested across the country on June 29 against the delay in declaration of the exam dates and delegations met RRB officials in Delhi and Kolkata. Following the protests, the RRB published a notification and said the Computer Based Aptitude Tests will commence in August / September, 2018.

Initially, an Ministry of Railways notification had mentioned that the Computer Based Aptitude Tests for this RRB recruitment process will be conducted during April and May, 2018 (tentatively).

The protesters are complaining that June has ended, and still the RRB has not declared any dates for this recruitment for which more than 23.7 million -- 2.37 crore - candidates have applied.

"Repeated fake news regarding exam dates have rendered 2.4 crore applicants confused and clueless about their future of employment," said Rozgaar Maange India in a statement.

In Delhi, Rozgaar Maange India protested outside the Rail Bhavan. A delegation met Amitabh Khare, Executive Director, RRB who assured that the "tentative dates" for the exam will be out by the first week of July.

However, after the protests, the RRB has now released a statement and said that application scrutiny is in final stages and is likely to be completed by first week of July, 2018.

"Thereafter the status of the candidates will be uploaded on the website of all the RRBs," RRB said.

"Computer Based Written Tests for Assistant Loco Pilot /Technicians and Level-I posts are likely to commence in August/September, 2018. Exact dates will be advised through RRBs' websites in due course," the statement added.

RRB also advised the candidates to refer only to the official websites of RRBs for periodical updates regarding these recruitments and not to get mislead by unauthenticated news items/posts circulating in media/social media.

Ministry of Railways had in February this year announced one of the world's largest recruitment processes for 89409 posts in Group C Level I (Erstwhile Group D) and Level II Categories.

Rozgar Mange India's protested at RailBhawan, Delhi against delay in declaration of exam date & massive vacancy cut. A delegation met the ED of Railway Recruitment Board & other officials. But only assurance of tentative date by July has been given.@sucheta_ml@Dipankar_cpimlpic.twitter.com/XkXRjnEmBK