The RRB Group D admit cards for the Computer-Based Tests have been made available on the official websites of the concerned Boards four days prior to the examination.

Railway Recruitment Board or RRB of the Indian Railways has achieved a milestone of holding examination for over one crore candidates for recruitment to Level-1 posts. According to a schedule announced by the RRB, the official hiring agency of country's largest employer, in all, 1.89 crore candidates are to sit for this examination to compete for recruitment against 62,907 vacancies of Level- 1 posts or Group D posts. The RRB Group D admit cards for the Computer-Based Tests have been made available on the official websites of the concerned Boards four days prior to the examination.

The examination is being held in over 400 centres, according to a statement from the Indian Railways earlier.

RRB Group D Exam 2018: Everything You Need To Know About The Recruitment

Each day 3 to 4 lakh candidates appear at the examination and the attendance has been over 60%, added the statement.

Before this ongoing exam for Level- 1 posts, RRBs have also completed first stage Computer-Based Test or CBT for 47.56 lakh candidates for ALP and Technician posts from August 9 to September 4, 2018. 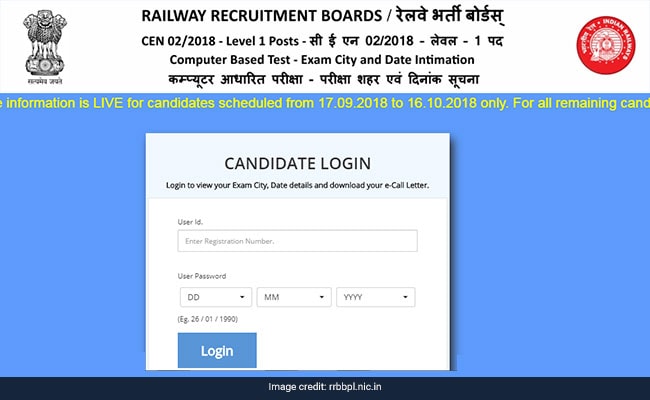 The Indian Railways had released the RRB ALP results for the first stage last month, but it was withdrawn after the Boards received complaints about the results. Now, a revised result is expected on December 20, 2018.

Elaborate arrangements have been made by Indian Railways for this unprecedented scale of examinations.

The examination is online and each center is equipped with modern electronic devices so as to be as candidate friendly as possible.

"To ensure free and fair examination CCTV cameras have been installed in the examination halls. Apart from trained invigilators flying squads have been deputed to visit centers so that there is no unfair means adopted by any candidate," the Railways said in another statement.

To help candidates reach the test centers, Google link map has been provided on the admit card.