Sub-Zero Temperature, Indian Students In Ukraine Down To Fruits, Biscuits

Fears of being caught up in the fighting, long traffic jams and severe weather meant students were reluctant to heed the Indian government's suggestion they make their own arrangements to reach the border with Poland, Romania or Slovakia. 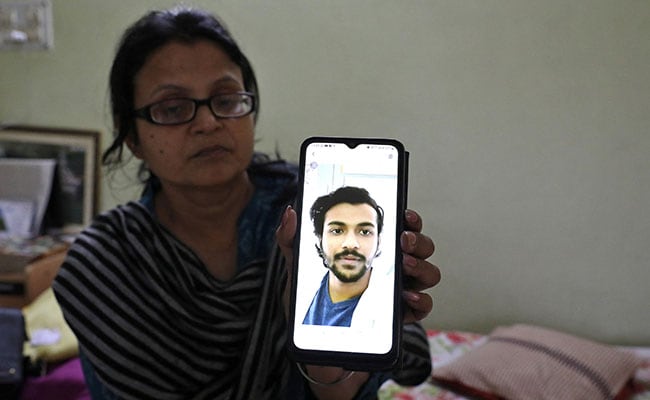 All through the night, as Russian forces drove deeper into Ukraine, a small group of Indian medical students in the Ukrainian city of Kharkiv cowered in a dark basement under their apartment building, hearing a barrage of explosions.

The bombardment was unabated in the morning.

"Right now, all we can hear is the sound of shells," Lakshmi Devi, 21, a third year student at the Kharkiv National Medical University, told Reuters via phone on Friday. "We can't even count how many."

Devi is among tens of thousands of foreign students trapped in Ukraine as the biggest attack on a European state since World War Two escalated.

Indian students numbering about 18,000 constitute the largest group out of the nearly 76,000 foreign students studying in Ukraine, mainly in medical courses, according to official estimates. Thousands of African students are also stranded in the former Soviet Republic.

In western Ukraine's Ternopil National Medical University, fifth-year medical student Pushpak Swarnakar was among nearly 2,000 other Indians, he said, were sheltering in bunkers.

Fears of being caught up in the fighting, long traffic jams and severe weather meant students were reluctant to heed the Indian government's suggestion they make their own arrangements to reach the border with Poland, Romania or Slovakia, he said.

"We have stocked food and water for at least one week," Swarnakar, 25, said, after local authorities warned of power, gas and water supply outages.

In India, parents and families, state governments, and opposition parties have urged Prime Minister Narendra Modi to take immediate steps to ensure the safe return of the students.

PM Modi's government says it is trying to evacuate the students. Teams of Indian foreign ministry officials have been sent to Ukraine's borders with Hungary, Poland, Slovakia and Romania to assist any fleeing Indian nationals.

Hungary said it will open a humanitarian corridor for citizens from countries like Iran or India, letting them in without visas and taking them to the nearest airport at Debrecen.

But from their dank bunker in eastern Kharkiv, Ukraine's second-biggest city that lies close to Russia border, Devi and a classmate said they had no means to travel over 1,000 kilometres towards the western borders.

"For us, it is impossible," said Nandan G.B., also a third year student in Kharkiv.

The Ministry of External Affairs did not immediately respond to questions from Reuters on the concerns raised by students. Foreign Minister S Jaishankar said he spoke with his Ukrainian counterpart on Friday, and thanked him for supporting the students' return.

In Kharkiv the city's mayor told residents to shelter after more loud blasts. For now, the students said they would keep to the relative safety of the bunker, despite a lack of any heating as temperatures dipped below freezing.

Food and water were running short, with the nine of them left with some fruits and biscuits, they said.

"We just want to get back home," said Devi.