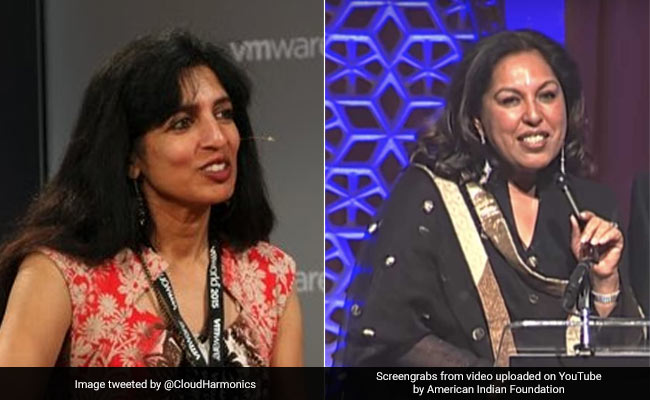 Jayshree Ullal and Neerja Sethi are both high level executives in IT firms in the US.

Indian-origin technology executives Jayshree Ullal and Neerja Sethi have made it to the Forbes' list of America's 60 richest self-made women, with 21-year-old reality-TV star and entrepreneur Kylie Jenner the youngest to be featured in the power list.

"America's top female entrepreneurs have shattered ceilings and scaled new heights, creating companies and building fortunes in everything from genetic testing to aerospace. Increasingly these self-made starters are tapping social media to cement their brands and build businesses ever more quickly. That in turn has helped the nation's most successful women become richer than ever before," Forbes said.

Born in London and raised in India, Ms Ullal, 57 has been president and CEO of Arista Networks, a computer networking firm, since 2008.

The publicly-traded company recorded revenues of USD 1.6 billion in 2017. Forbes said Ms Ullal owns about five per cent of Arista's stock, some of which is earmarked for her two children, niece and nephew.

Ms Sethi, 63, is the vice president of IT consulting and outsourcing company Syntel, a company she co-founded with her husband Bharat Desai in 1980 in their apartment in Troy, Michigan.

The combined net worth of the 60 women on the list is a record USD 71 billion, 15 per cent more than in 2017. The minimum net worth to make Forbes' fourth annual ranking of these top women jumped 23 per cent to a record USD 320 million.

Twenty-four of these women are billionaires, another record, up from 18 last year. Seven newcomers joined the ranks, including four Instagram-savvy makeup moguls. The richest of these new faces is billionaire Anastasia Soare, whose cosmetics company Anastasia Beverly Hills, best known for beautifying eyebrows, now has more than 17 million followers on Instagram.

The youngest is Ms Jenner, who turns 21 in August. Half-sister of Kim Kardashian West, who is also on the list for the first time, Ms Jenner has leveraged her massive social media following (110 million followers on Instagram) to build a USD 900 million cosmetics fortune in less than three years.

"That makes her worth more than twice as much as her more famous sister," Forbes said.

Taking the number one spot is Diane Hendricks, a Wisconsin billionaire who owns ABC Supply, one of the largest wholesale distributors of roofing, siding and windows in America.

The vast majority of list members hail from California - 27 altogether. Although 17 list members made their fortunes in fashion and retail, 13 including Facebook's Sheryl Sandberg built fortunes in technology, while 10 including Oprah Winfrey and Taylor Swift made it in media and entertainment, Forbes said.

The list also includes immigrants who have achieved success and created wealth not only for themselves but for their employees too.

Fourteen of the top 60 women entrepreneurs were born outside of the US, including Eren Ozmen, the majority owner of aerospace and defence business Sierra Nevada Corp who is now gambling hundreds of millions to take on Elon Musk and others in space.

Ms Ozmen arrived from Turkey in her 20s and held down several part-time jobs while attending business school, selling homemade baklava at a bakery and even working as a night janitor at Sierra Nevada, years before she and her husband bought it.