Indian-Origin Man Crashes Into US Air Base. FBI Says No Terror Angle

Hafiz Kazi, 51, was living in the US since 1993 and was a legal resident, FBI Special Agent Sean Ragan said at a news conference, adding that he was originally from India. 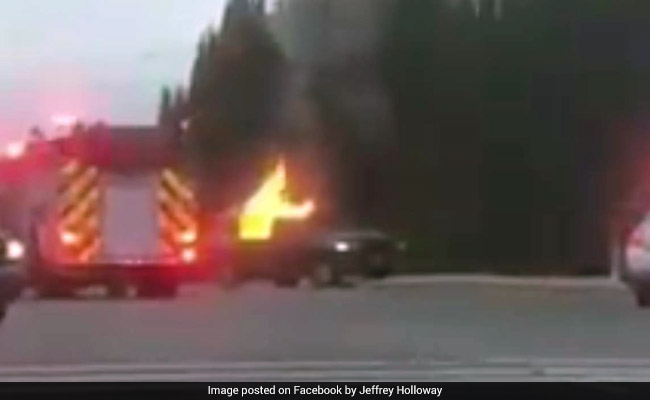 New York, United States: The man, who drove through the main gates of a major US air base carrying propane tanks and gas cans on Wednesday and died as his vehicle caught fire, has been identified as an Indian-origin American, the FBI said Saturday, denying any terror angle in the incident so far.

Hafiz Kazi, 51, was living in the US since 1993 and was a legal resident, FBI Special Agent Sean Ragan said at a news conference, adding that he was originally from India.

He apparently lived in the San Francisco area and had worked as a cab driver, Ragan said.

Around 7pm on Wednesday, Kazi drove his minivan through the main gate of Travis Air Force Base in Northern California. The vehicle soon veered, crashed and started burning and by the time first responders broke through its locked doors, Kazi was dead, Regan was quoted as saying by the CNN.

No shots were fired during the fiery crash, he said, adding investigators discovered five propane tanks, three phones, gas cans, several lighters and a gym bag inside the car.

"Authorities have not announced a motive but the security breach does not appear at this point to be terrorism-related," Ragan said.

"We don't have any nexus to terrorism at this point," he said but added that Kazi's phones and social media were being searched for any possible connections.

Officials said the investigation is ongoing and there are no current known threats to the base or community. "The main gate has reopened and all other facilities are operating as normal," the base officials added.

Promoted
Listen to the latest songs, only on JioSaavn.com
Travis Air Force Base is home to 10,000 military personnel and is a major hub for logistics and military cargo in the Pacific. It's the largest military aerial port in the United States and includes facilities for airlift and aerial refuelling, according to the report.

The base is located in Solano County and is midway between Sacramento and San Francisco.
Comments
US air baseFBIUS car crash