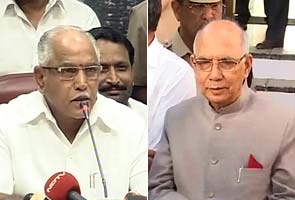 Bangalore: In an apparent snub to Governor H R Bhardwaj, Chief Minister B S Yeddyurappa and his Cabinet colleagues stayed away from the customary 'At Home' hosted by him on the occasion of Republic Day amid the ongoing bitter political battle between the two.

It came just hours after the Governor in his customary address during the Republic Day function, where he shared dais with Yeddyurappa, warned against any complacency in rooting out corruption and lauded the Lokayukta for doing his best in cleansing the system.

The two leaders, who are at loggerheads after the Governor gave sanction for prosecution of the Chief Minister in alleged land scams, exchanged quick greetings and a rather reluctant embrace at the start of the function and Yeddyurappa chose to leave after the Governor's speech.

The Chief Minister, however, sought to down play his and his colleagues' absence at the 'At Home' saying it was not a boycott but he was forced to skip the event as he had a "pre-fixed engagement".

"I have informed the Governor about my inability to attend the Republic Day tea party," he said but did not explain the reason for the absence of his ministers.

The development came a day after BJP legislators staged a protest demonstration outside Raj Bhavan and vowed to continue their agitation to press for recall of Bhardwaj.

Yeddyurappa, who has been facing Opposition calls for his resignation in the wake of the Governor's sanction to prosecute him, ruled out quitting saying, "I will continue as Chief Minister till the next elections. In the next elections I will ensure that BJP retains power".

Chief Secretary S V Ranganath and the Chief Minister's Principal Secretary I S N Prasad and other top officials were among those present at the Raj Bhawan besides Opposition Congress Leader in the Assembly Siddaramaiah.

Taking their campaign against Bhardwaj to a new pitch, BJP has announced series of public meetings to press for his recall of the Governor, whom it has charged with trying to destabilise the first ever saffron party government in the south.