"Will Stand In Gandhian Style Before Dictatorship": Rahul Gandhi 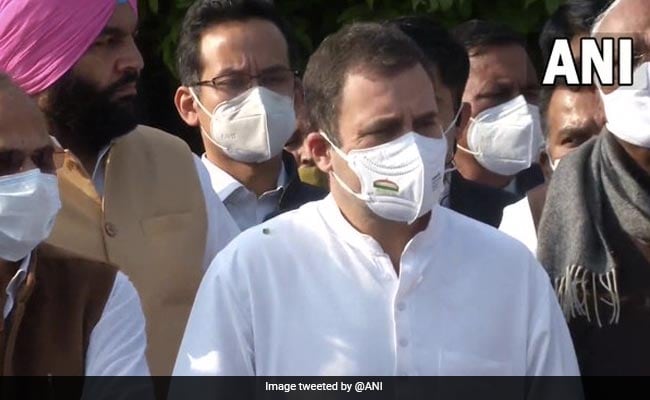 Backing opposition protest against the suspension of 12 Rajya Sabha MPs, Congress leader president Rahul Gandhi on Wednesday said they will not bow before "dictatorship" and continue to agitate in "Gandhian style".

He said this while sharing a picture of opposition leaders protesting outside Mahatma Gandhi's statue on the parliament complex.

Opposition MPs have unitedly protested the suspension of Rajya Sabha members for their "unruly" behaviour on the last day of the previous session (Monsoon Session). They have termed the suspension "wrong and undemocratic and against the rules and precedents of the house".

"We will stand in Gandhian style before the dictatorship. And, we will not bend," Mr Gandhi said in a Facebook post, using the hashtag "#NoFear" and shared a picture of the protesting opposition MPs.

Rajya Sabha Chairman Venkaiah Naidu has said he was not considering Rajya Sabha Leader of Opposition Mallikarjun Kharge's appeal of revoking the action as the suspended MPs have not shown any remorse, but on the contrary, justified their acts.

Mr Gandhi also attacked the government over inflation and rise of cooking gas. He said this after the price of a commercial LPG cylinder rose by Rs 101 on the first day of December.