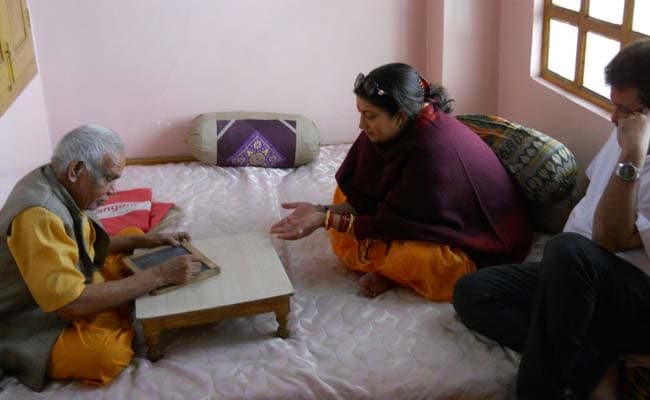 Bhilwara: Education Minister Smriti Irani, who is in Rajasthan for a personal tour, was seen visiting one of the country's best-known astrologers today.

The 80-year-old referred to as "Nathu Lal ji" by his followers reportedly told the minister, who is 38, that she's due for a huge promotion.

Promoted
Listen to the latest songs, only on JioSaavn.com
"She will become President... in five years," the astrologer told reporters.

Former President Pratibha Patil and Rajya Sabha MP Amar Singh are among the high-profile fans of the astrologer, who lives in a village near the famous temple town of Nathdwara, around 280 kms from the state capital of Jaipur.

When asked to comment on her consultation, Ms Irani said, "What I am doing in my personal life is not the responsibility of media to report until and unless it affects my duties."
Comments
Smriti IraniSmriti Irani astrologerAstrologer