The cameraman was immediately rushed to a hospital, and the incident left Twitter buzzing with praise for PM Modi 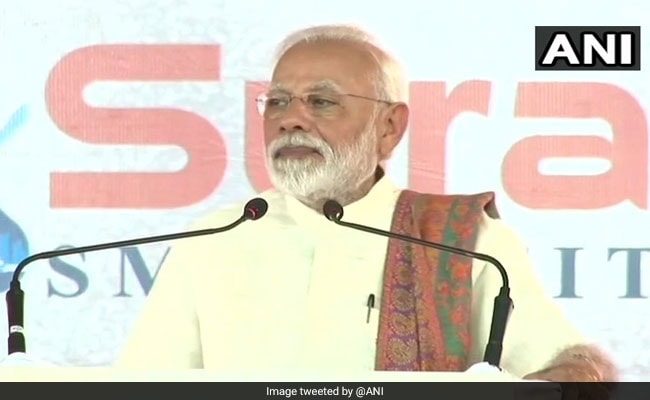 Prime Minister Narendra Modi stopped his speech at the inauguration of a new terminal building in Surat.

Prime Minister Narendra Modi stopped his speech midway at the inauguration of a new terminal building in Surat today after a cameraman covering the event fainted. In a video of the incident, he is seen asking for an ambulance to be arranged for the cameraman.

PM Modi was speaking after laying the foundation stone for the extension of the new terminal building at Surat airport when he noticed the cameraman, identified as Kishan Ramolia, had fainted.

As mediapersons rushed towards him to help, PM Modi was seen asking officers and Special Protection Group or SPG personnel to arrange for an ambulance.

#WATCH: PM Modi stops his speech at the inauguration of the new terminal building in Surat after observing that a cameraman has fainted. PM told the officers to urgently arrange for an ambulance for the cameraman, Kishan Ramolia. He was rushed to the hospital in a 108 Ambulance. pic.twitter.com/xUudmFl7cc

The cameraman was immediately rushed to a hospital, and the incident left Twitter buzzing with praise for the prime minister.

The cameraperson, on regaining consciousness, thanked the PM. "I had no water since morning as it wasn't allowed to be carried inside, so I fainted. It's good that PM was paying attention to his surroundings during his speech, he noticed me falling down and asked officers to help me," he said.

The incident occurred just days after Congress president Rahul Gandhi was seen rushing to help a photographer who tripped and fell in Odisha, leading to some netizens calling it the "Rahul Gandhi effect."

The prime minister was on a day-long visit to Gujarat to dedicate to the nation the National Salt Satyagraha Memorial at Dandi on Mahatma Gandhi's death anniversary.