The opposition notice -- carrying 71 signatures -- was submitted to Mr Naidu on Friday. Seven of the lawmakers have stepped down since, but the number of signatures is still well above the mandatory 50, the party has said. 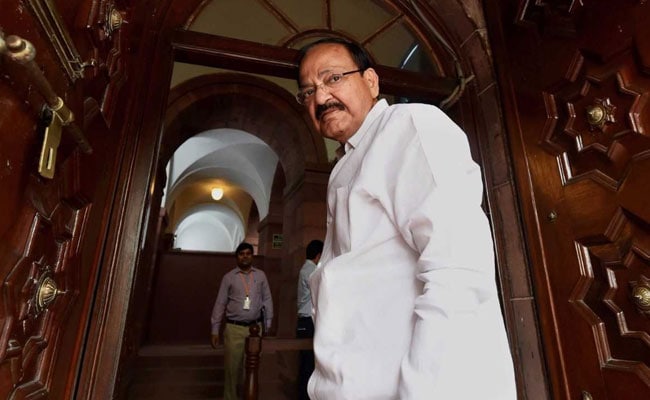 Vice-President Venkaiah Naidu has to now decide whether the motion will be accepted. (File)

New Delhi: Vice-President Venkaiah Naidu, who, as the Rajya Sabha chairman, can alone decide whether the opposition's notice for impeachment of Chief Justice of India Dipak Misra will be accepted or rejected, has started consultations on the matter. Mr Naidu, who was in Hyderabad, cut short his visit and returned to Delhi on Sunday afternoon.

Sources in the Congress have said that if the motion is not taken up, they will approach the Supreme Court.

The opposition notice -- carrying signatures of 71 lawmakers from seven parties -- was submitted to Mr Naidu on Friday. Seven of the lawmakers have stepped down since, but the number of signatures is still well above the mandatory 50, the party has said. According to the rules, Mr Naidu now has to decide whether the motion will be accepted.

The Constitution says the Chief Justice of India can be impeached only on grounds of proved misbehaviour or incapacity. The opposition has backed its demand on five grounds, which, the Congress said, equals misbehavior. In a stinging takedown, Union Minister Arun Jaitley has called it a "revenge petition", accusing the "Congress and its friends" of using impeachment as "political tool".

While impeachment proceedings have never been taken up against a Chief Justice of India, the procedure says after such a notice is given, the chairman forwards it to the Rajya Sabha secretariat to verify mainly two things --- the signatures of the members who signed the petition and whether the rules and procedures have been followed.

The secretary general of Rajya Sabha sends a report to the chairman who then decides whether to accept the petition or not. The chairman is likely to receive the report by Tuesday.

Promoted
Listen to the latest songs, only on JioSaavn.com
If the motion is admitted, he has to form a three-member committee to investigate the charges against the Chief Justice of India. The committee will comprise a senior judge of the Supreme Court, a judge of the High Court and a distinguished jurist. If they support the motion, it is taken up for discussion and voting in the house. The process is followed in the other house if the motion is passed in the first house with a special majority.

A retired secretary General has told NDTV that advance publicity has been given to the impeachment notice in violation of rules.  The handbook for Rajya Sabha members says "a notice for raising a matter in the house should not be given publicity by any member or other person until it has been admitted by the chairman and circulated to members".