A probe into the flyover collapse found that failure to cast cross beams for locking the girders led to the collapse of a portion of a railway overbridge (ROB) as the structure was left exposed to external forces. 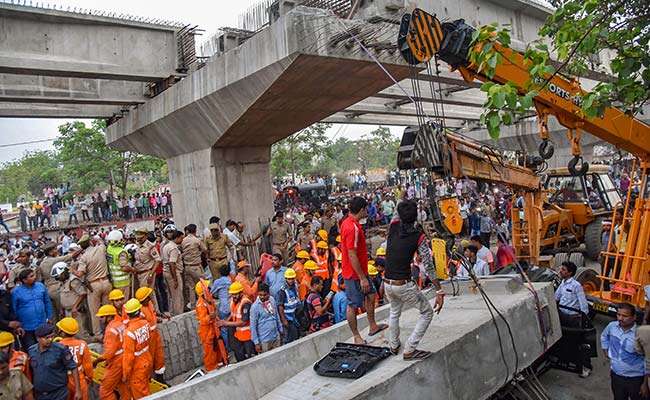 Eight people including seven engineers and a contractor have been arrested in connection with the Varanasi flyover collapse incident in May, which left 15 people dead, Uttar Pradesh DGP OP Singh said today.

He said action was taken against the eight after collecting "technical proofs" with the help of scientists of Central Building Research Institute, Roorkee (Uttarakhand).

"It was found that there were many shortcomings in the bridge on which the investigating officer quizzed the engineers before arresting them," Mr Singh said.

A probe into the incident found that failure to cast cross beams for locking the girders led to the collapse of a portion of a railway overbridge (ROB) as the structure was left exposed to external forces.

The report of a technical committee, set up by the state government to ascertain the cause of incident and accessed by PTI, also said uninterrupted traffic flow on the busy road was the main reason for generating vibrations that may have led to the collapse.

A complaint was registered against the Uttar Pradesh State Bridge Corporation officials, who were working on the site, under section 304 (culpable homicide not amounting to murder), section 308 (attempt to commit culpable homicide) of the IPC on May 16, a day after the collapse, following a complaint by the Roadways police outpost in-charge.

The project manager and other officials were suspended and the government also shifted Managing Director of Bridge Corporation Rajan Mittal.

Rajan Mittal was removed from his post during the term of the Akhilesh Yadav government following complaints. But he was reinstated when the BJP government came to power last year.