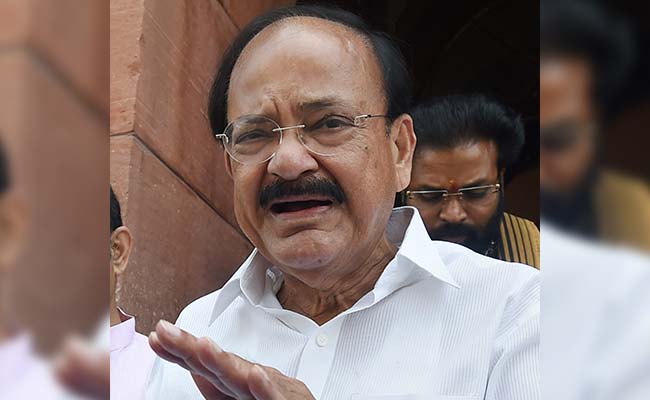 Union Minister Venkaiah Naidu suggested that all public representatives once deciding to quit their party and join another should resign forthwith. (File photo)

Union Minister Venkaiah Naidu today sought to revisit the role of the Speaker while testing the majority of a government and implementing provisions of anti-defection law, as the Congress won the high-stakes trial of strength in the Uttarakhand Assembly.

"In the backdrop of what has happened in Uttarakhand, we have to revisit the Speaker's role vis-a-vis the issue of testing of majority and also in the implementation of anti- defection law," Mr Naidu, also the Union parliamentary affairs minister said.

"I want the debate to take place in this country," he said, adding there has to be a time limit set for deciding on cases of anti-defection law.

The senior BJP leader also suggested that all public representatives once deciding to quit their party and join another should resign forthwith and may seek a fresh mandate.

The minister said, "Any people's representative, be it an MLA or MP, if he changes his party and switches over his loyalty, he should forthwith resign as per the spirit of the Constitution and recontest."

He said if a public representative switches his loyalty to join another party "he should be disqualified immediately."

Incidentally, a number of Telugu Desam legislators have joined TRS in Telangana and those of YSR (Cong) joining Telugu Desam party in Andhra Pradesh, not evoking any action under the anti-defection law.

Asked about the role of the Uttarakhand Speaker in disqualifying the nine rebel Congress legislators, Mr Naidu asked what remedy was there if the Speaker of an Assembly acts "wrongly" and not in conformity with laid Constitutional provisions.

"What alternative do you have. We have to revisit that and then take a call," he said.

To a question on the implications of the Harish Rawat government winning the floor test in voting today, the minister said the Central government had done nothing wrong in imposing President's Rule in Uttarakhand after the breakdown of Constitution in the state.

The Congress today won the high-stakes trial of strength in the Uttarakhand Assembly, in a clear setback to the Modi government which had dismissed the state government and imposed President's Rule on March 28.

The floor test which was the culmination of a number of twists and turns in the political drama marked by court battles.

The result of today's floor test is expected to be formally announced tomorrow after a video recording of the 90-minute proceedings of the Assembly is presented in Supreme Court in a sealed envelope.