UDAN, a flagship scheme under the Ministry of Civil Aviation, is playing a vital role in providing connectivity to people in far flung areas of the country. 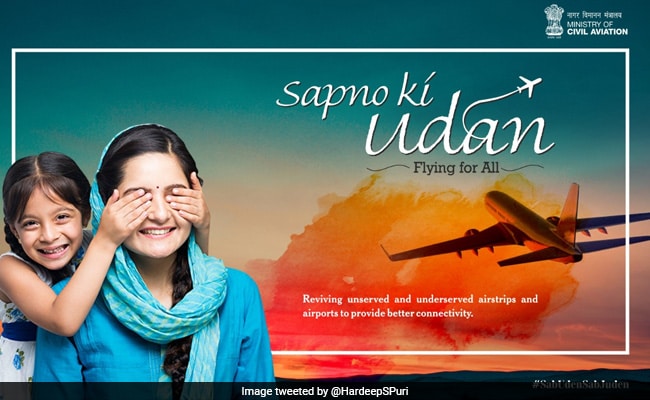 The Aviation Minister said he was "delighted" to inaugurate the UDAN route along with Uttarakhand Chief Minister Trivendra Singh Rawat.

UDAN, a flagship scheme under the Ministry of Civil Aviation, is playing a vital role in providing connectivity to people in far flung areas of the country. Since the launch of the first UDAN flight, in April 2017, by Prime Minister Narendra Modi from Shimla to Delhi, 268 routes are functioning connecting 45 airports and three heliports.

Taking the domestic connectivity further, I was delighted to inaugurate the RCS UDAN Route for Dehradun-New Tehri-Srinagar-Gauchar along with CM Uttarakhand Shri @tsrawatbjp Ji, under @PawanHansLtd today. With this we have added 6 more routes & 2 heliports at New Tehri & Srinagar pic.twitter.com/6NZVE5Ic4L

"With this, we have added six more routes and two heliports at New Tehri and Srinagar," Mr Puri said, adding that these routes provide a much-needed affordable air connectivity to the people of the hill state.

The government, in 2016, had launched the UDAN Scheme to boost the regional air connectivity in the country. Under the scheme, financial incentives in terms of concessions from the Centre, state governments and airport operators are extended to selected flight services to encourage operations from under-served airports.

As at least half of the seats in UDAN flights are offered at subsidised fares, and the participating carriers are provided a certain amount of viability gap funding (VGF) - an amount shared between the Centre and the state concerned. This is to make sure that the carriers do not suffer financial loses.